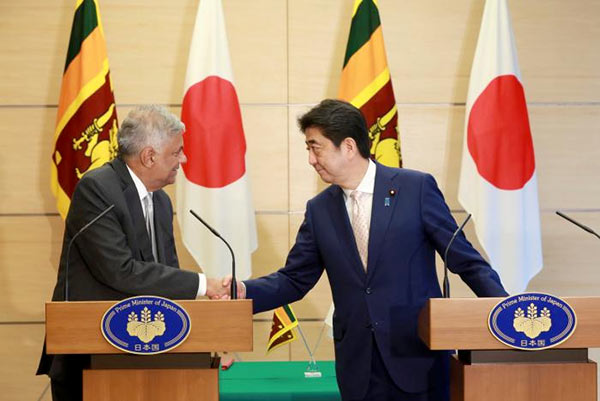 Sri Lanka will make sure no military activity is conducted at its ports, Prime Minister Ranil Wickremesinghe said in Tokyo on Wednesday, as China invests heavily in roads and harbours on the island nation.

Beijing, which is fortifying islands in the South China Sea to which it lays claim, has pumped hundreds of millions of dollars in Sri Lanka’s infrastructure since the end of the country’s civil war in 2009, when Colombo was shunned by Western investors over its human rights record.

“We want to ensure that we develop all our ports, and all these ports are used for commercial activity, transparent activity, and will not be available to anyone for any military activity.”

Wickremesinghe did not mention any specific countries.

China’s investments in transportation infrastructure in Sri Lanka are considered part of its ambitions to build maritime routes to the oil-rich Middle East and on to Europe.

That makes some countries, including India and the United States, nervous. Sri Lanka sits near shipping lanes through which much of the world’s trade passes on its way to China and Japan.

“The era of the Indo-Pacific is now being ushered in. Yet, however, true regional prosperity cannot come into being without the realisation of a free and open Indo-Pacific,” Abe told the same news conference.

“To make this happen, it is indispensable for Sri Lanka to achieve sustainable growth as a hub, and develop ports that are open to all.”