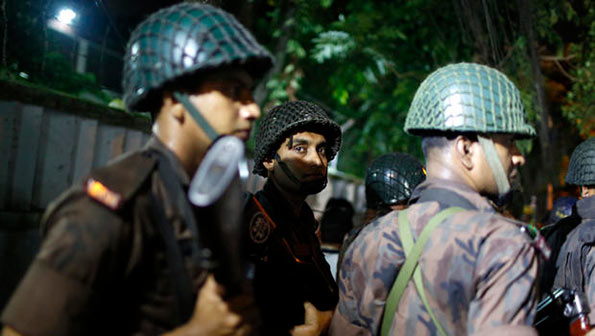 Sri Lankan nationals are suspected to be among several foreigners taken hostage after gunmen attacked a restaurant popular with expatriates in the diplomatic quarter of the Bangladeshi capital on Friday.

“Hon Ruwan Wijewardene informed us of two possible Sri Lankans among hostages inside restaurant in Dhaka. We are urgently looking in to it. Our Deputy Chief of Mission in Dhaka in touch with Police regarding the two individuals suspected to be among the hostages in the cafe,” tweeted Harsha de Silva, Sri Lanka’s Deputy Minister of Foreign Affairs.

Unidentified attackers traded gunfire with police on Friday night near the Holey Artisan Bakery cafe in high-security Gulshan diplomatic area in Dhaka. At least 20 civilians, including foreigners, are believed to be held hostage.

The standoff was continuing as the sun rose in Dhaka Saturday, eight hours after the attack.

Seven Italian nationals are thought to be among the hostages taken by gunmen, Italian state television said quoting the Italian ambassador to Bangladesh.

Bangladesh police were preparing to launch an operation to free the hostages, a police officer at the site told Reuters by telephone early on Saturday.

Two police officers have been killed in a gun battle, a spokesman said, and about 30 others injured.

So-called Islamic State (IS) has said it carried out the attack.

A statement on the group’s self-styled news agency Amaq said militants had attacked a restaurant “frequented by foreigners”. It said that more than 20 people “of different nationalities” had been killed but this has not been confirmed.

Gulshan is one of the most highly guarded areas of Dhaka as many foreign missions are located in the area.