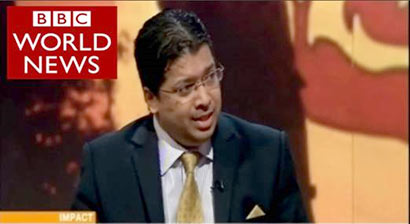 He told BBC presenter Mishal Husain of the show ‘Impact’, “We respect the sovereign rights of Britain, and of every other country, and we expect you to respect ours. We are a sovereign and an independent state and naturally we expect the same courtesy that you would expect us to apply for your country.”

Sri Lanka’s post-conflict measures at reconciliation, rehabilitation, reintegration, and reconstruction were highlighted by the High Commissioner during the interview.

Asked by the presenter what positive developments have occurred in the last four years since the end of the 26 year conflict, the Sri Lankan High Commissioner said

297,000 people rescued from the clutches of the LTTE have been rehabilitated, in perhaps the largest hostage rescue operation in global history. “After a 28 year bitter and internecine conflict with the terrorists we finally achieved peace in the country under the leadership of President Mahinda Rajapaksa.

There is a billion dollar programme going into the North and East, Negenahira Navoday a, and Uthuru Vasanthaya which is building the lives and infrastructure of the people. Eleven thousand six hundred LTTE cadres are now being rehabilitated, ” Dr. Nonis said .

“I have met these kids. They were cruelly snatched by Prabhakaran from their parents, and they were fighting but they didn’t know what they were fighting for. It is so wonderful to see them receiving vocational training, being rehabilitated and re-integrated into society,” the High Commissioner said.

Questioned on refugees and persecution, Dr Nonis said, “I would say there are many people who for various different reasons come and seek asylum, and I think what we have to separate, is those who seek asylum as economic refugees, from those who seek asylum as political refugees” – You must remember the demography of the country, the majority of Tamil people actually live in the Centre and South of Sri Lanka, if you look at Colombo, its roughly a 30-30-30 percent split between Sinhalese, Tamil and Muslim. We have a huge dichotomy or disjuncture in perception between what is portrayed here and the reality of contemporary Sri Lanka”.

Asked “How many years would it take to say that we are now reconciled,” Dr Nonis pointed to South Africa and the post-apartheid period where there are still substantial issues and to Northern Ireland where, despite the “Good Friday” Agreement, there are still issues.

“In comparison, I think we have done pretty well,” he said reiterating that it is only four years since the military defeat of the LTTE. (Daily News)