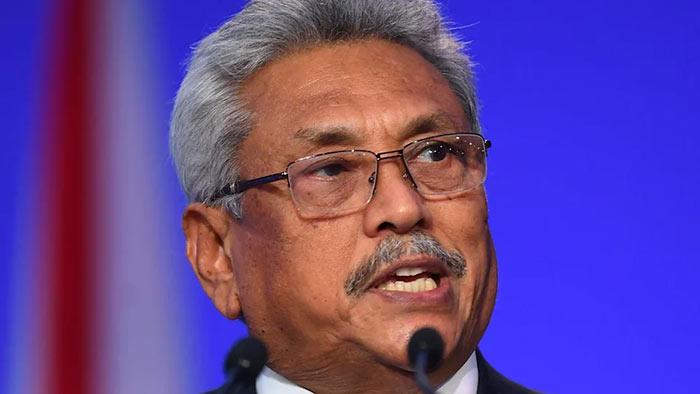 After weeks of defiance Sri Lanka’s President Gotabaya Rajapaksa said he’s open to changes in the nation’s constitution to appease protesters calling for his ouster, likely setting the stage for curbing the executive’s sweeping powers as the nation’s deepening economic crisis has boiled over into political turmoil.

“To take the economy on a right direction, to meet the expectations of the younger generation is the duty of the government,” the president said at a ceremony swearing in new cabinet members Monday, adding that while “respecting the supreme constitution” he was ready “if necessary to make changes in the future, and save the country from the economic crisis.”

Sri Lanka is seeking up to $4 billion this year to help it import essentials and pay creditors amid a downward economic spiral of dwindling foreign reserves and soaring inflation. The crisis has triggered political unrest, with the president losing the support of his own coalition partners and facing growing street protests calling for his resignation.

In his comments, Rajapaksa acknowledged his government shouldn’t have delayed seeking an IMF bailout and forced farmers in the island nation to switch to organic farming with little notice as the administration saved dollars by stopping the import of chemical fertilizer.

“We should have gone to an IMF program earlier,” the president told lawmakers according to a copy of his speech. “I think it was a wrong decision to not give chemical fertilizer to farmers.”

Rajapaksa’s latest comments mark a softening in his defiant stand. Last week, he had called for “unity and better understanding” from citizens while greeting them for the Sinhala and Tamil New Year.

On Monday, the president swore in 17 new cabinet ministers. While his brother Prime Minister Mahinda Rajapaksa retained his position. Two other Rajapaksa siblings and a nephew — all ministers in the earlier cabinet that resigned en masse earlier this month — didn’t receive any portfolios. Protesters have called for the entire Rajapaksa family to quit the government.

Shortly after the president’s comments, the prime minister’s office issued a statement, saying Mahinda would propose some constitutional changes “which will have relevant matters relating to the executive, legislature and judiciary.”

The amendments, the premier hoped would “meet the aims of the people,” and would be submitted to the newly appointed cabinet, the statement said, without elaborating.

The opposition and protesters want the country’s constitution changed to limit the president’s wide-ranging powers, which include calling for elections mid-way through a five-year parliament term and appointing and firing government officials and judges.

Sri Lanka’s main opposition Samagi Jana Balawegaya party plans to introduce motions for a no-confidence vote and impeachment proceedings against the president in parliament. Gotabaya’s opponents, and coalition partners that have distanced themselves from him, have also called for the abolition of the sweeping executive powers of the presidency through constitutional amendments.

“The parliament has legislative powers. Various political parties are making statements about constitutional changes. There is an opportunity to discuss these in parliament and pass them,” said a statement from the president’s office.

Rajapaksa also appeared to make a case for continuing in office despite the clamor for his exit.

“To overcome economic challenges we need help from IMF and friendly countries. For that we need political stability,” he told the incoming cabinet. “I am inviting all parties to join. To accept my invitation and join they still have the opportunity.”

The opposition has, so far, refused to join any interim government.

Moody’s Investors Service downgraded the country’s credit rating Monday, warning that it was speeding toward a “series of defaults” after deciding to stop paying its foreign debts. The island nation was cut to Ca from Caa2, following similar downgrades by S&P Global Ratings and Fitch Ratings.