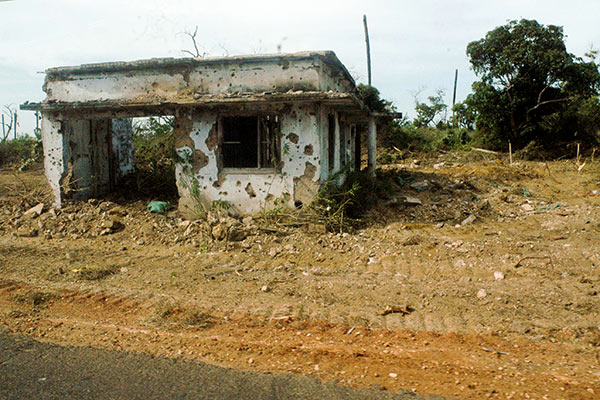 For almost two decades, Sivaraja Sivakumar has lived on a plot of land in the north of Sri Lanka – but he has no idea who owns it.

The 43-year-old father of two from Sri Lanka’s Tamil minority says he prays every day that he is the rightful owner, but cannot be sure.

“I have no deed that says I am the owner, I have never had such a deed,” he said.

In 1998, the young Sivakumar fled the northern town of Kilinochchi, the epicenter of Sri Lanka’s 26-year civil war to Vavuniya, 80 km (50 miles) to the south.

There, with the help of a paramilitary group allied with government forces, he was settled on a small plot of land in the village of Nelukkulam, about 10 km from the main town.

As the bloody conflict escalated, Sivakumar tried to formalize his ownership of the land. “I had some documents, and I submitted them to various government bodies with no luck.”

Sri Lanka’s civil war ended in 2009, but the farmer still lacked land titles. His predicament is common across the former combat zone, where civilians bore the brunt of the fighting.

Thousands of acres of land, some privately owned, are held by government forces who set up security posts and buffer zones during the war, while others are held by other government agencies like the wildlife department.

Now, almost eight years after the war ended, hundreds of smallholders are pinning their hopes on the newly-minted Right to Information (RTI) Act to unearth details of who owns the land on which they live and work.

A Vavuniya-based youth group, the Association for Friendship and Love (AFRIEL) has been spearheading a campaign to submit RTI requests across Sri Lanka’s Northern Province, seeking information on government land holdings.

By mid-March, a month after the law was passed, more than 1,000 RTI requests had been filed by citizens seeking information on land ownership and government acquisitions, said AFRIEL chairman, Ravidra De Silva.

“Before the act, all requests to government agencies on land matters never got answered,” De Silva said while assisting villagers from Nelukkulam to submit applications.

“The RTI Act made it mandatory by law that government officials answer these queries and within a specific time frame.”

During the last two weeks of March, AFRIEL will hold RTI camps in villages across the Northern Province to answer questions and speed up the process.

“We have also submitted RTI requests on military land holdings, land distributed by political parties and any compensation paid by the military for land acquisitions,” he said.

Over 10,000 acres of private land in the Northern Province were held by the military, citing continued security concerns after the war ended in May 2009 when government forces defeated Tamil separatists. According to the Defence Ministry, so far 5,258 acres have been released to their rightful owners.

“It is not only about the high security zones held by the military, there are lots of other confusions because for three decades instead of holding onto land, people ran for their lives,” De Silva said.

AFRIEL’s campaign was initially met with resistance from local government authorities who feigned ignorance of the RTI Act. “We had to convince them that the act was in fact law and that there was no alternative to accepting the applications.”

De Silva said AFRIEL had now begun to receive some responses from government agencies. “At least three applications seeking information on military land acquisitions have been answered,” he said.

The law has been welcomed by senior politicians as a step towards transparency in Sri Lanka, a drastic change from the past, especially during the civil war, when the government administration was obscured by bureaucracy and secrecy.

“It is like putting the government inside a glass box,” media minister Gayantha Karunathilake told reporters.

Sivakumar hopes the minister’s assessment is true, and he will soon get clarity over who owns his precious land.

“In the past, every time I have sought information on this land, I have just got blank stares from government officials,” he said. “This time at least I have a slip that says they have accepted by query, that itself is a change.”