Strikers deemed to have vacated posts 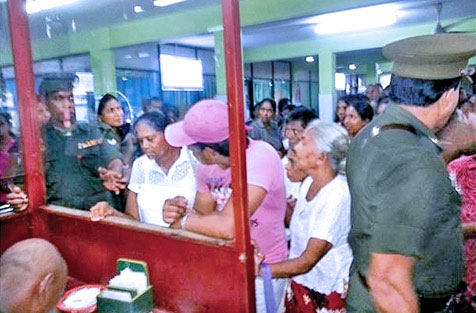 According to the sources, Health and Indigenous Medicine Minister Dr. Rajitha Senaratne ordered health authorities to take action against all substitute and casual health workers who did not report to work yesterday and who did not carry out their duties after signing the same day.

He also ordered them not to allow any employee to hang around health institutions without reporting for work. Action will be taken against minor staff supervisors who closed their offices yesterday, the sources said.

Meanwhile, healthcare services at the Matara Hospital were disrupted due to the islandwide strike launched by a group of health sector employees yesterday, our Matara group cor reported

Out of 200 employees including attendants, health assistants and minor employees billed to report to duty at 8.00 a.m. yesterday only 20 had reported to work.

All surgical operations except emergency operations earmarked for yesterday were postponed. However, doctors and nurses were seen working with dedication to cater to the needs of indoor patients.

Hospital authorities had obtained the support of Army personnel and the St Johns Ambulance Brigade to man the OPD pharmacy counters, hospital kitchen and delivery of meals to indoor patients.