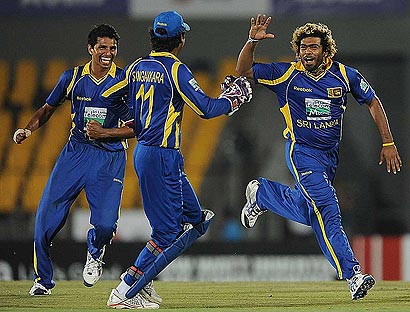 Upul Tharanga’s fourth one-day international century this year and a five-wicket haul from Lasith Malinga kept the series alive as Sri Lanka compiled a comfortable 78-run victory in Hambantota. After two substandard batting performances in the opening matches, Sri Lanka finally found their rhythm and their 286 was too tall a target for Australia, who lead 2-1 as the teams head to Colombo for the final two games in the series.

It was a solid all-round performance from Sri Lanka: Tillakaratne Dilshan and Kumar Sangakkara contributed useful runs and the work of the batsmen was well backed up by the outstanding Malinga and his bowling colleagues. Especially impressive was the debutant seamer Shaminda Eranga, who struck in his first over and deceived Ricky Ponting to keep Australia on the back foot early in their chase.

Eranga, 25, needed only three balls to make his mark on international cricket, with a delivery that nipped through the ever-widening gate left by an out-of-form Brad Haddin, who made 5. But the moment that Eranga will be most proud of came when his slower ball was not read by Ponting, who pushed back a return catch on 22.

Already, Malinga had drawn an edge to slip from Shane Watson (5), and at 52 for 3 following the Ponting dismissal, Australia were in a major hole. Michael Hussey and Michael Clarke did their best to rebuild in a 71-run partnership but Clarke couldn’t make it three fifties from three innings this series when on 46 he tamely fed a catch to mid-on off Malinga.

Hussey was his usual competitive self, ticking the score over and reaching his half-century, but he began to run out of partners when his brother David played on to Ajantha Mendis and Steven Smith was run out. Hussey gave Malinga his third wicket when he square-drove to point on 63, and from then, with 104 needed off 59 balls, it was only a matter of when Sri Lanka would wrap up the win.

Malinga ended up with 5 for 28 when his fast, accurate yorkers rattled the stumps of Xavier Doherty and Doug Bollinger, and the outcome wasn’t what Clarke had envisaged when he won the toss and sent Sri Lanka in. After rain over the previous day, the pitch gave the seamers some assistance but Tharanga and Dilshan survived the early stages despite numerous plays and misses, especially against Bollinger.

Bollinger, who is not in the squad for the upcoming Test series, finished with 4 for 42 and was the only member of the attack who posed a serious threat to Sri Lanka for most of the innings. The problem was that he didn’t make any of his breakthroughs in the early stages, and the 139-run opening stand from Dilshan and Tharanga set the tone for the rest of the match.

They began to score more freely once spin was introduced, Tharanga lifting Doherty confidently over mid-off for a pair of boundaries, and both openers drove well through the off side. Dilshan eventually fell for 55 from 59 balls when he pulled a short Bollinger delivery straight to deep midwicket, but Australia’s joy was to be short-lived as Sangakkara joined Tharanga in another solid stand.

Tharanga had struggled in the first two matches, after serving a three-month drug ban, but it was third time lucky as he began to find his touch. In between the edges and plays-and-misses, he nearly cleared the boundary with a strong pull off Lee and picked off runs against the part-time spin of David Hussey and Smith, and reached his century from 128 deliveries.

It continued a fine year for Tharanga, who despite his suspension has made more one-day international centuries in 2011 than any other player in the world. He also passed 4000 ODI runs and was the fastest Sri Lankan to reach the milestone, doing it in four fewer innings than the previous record-holder, Marvan Atapattu.

Tharanga fell when he tried to glide a ball to third man, only succeeding in steering a catch to Brad Haddin, but he had given Sri Lanka a terrific platform. Tharanga was the third wicket in ten deliveries for Bollinger, who had picked up Sangakkara (49 off 37 balls) lbw and the out-of-form Dinesh Chandimal, who was well snared at slip by Clarke for 4.

But even a late flurry of wickets – Sri Lanka finished nine down – couldn’t turn things around for Australia. After two flat matches, Sri Lanka were sharp, and if they keep that up in Colombo the series could yet be theirs.