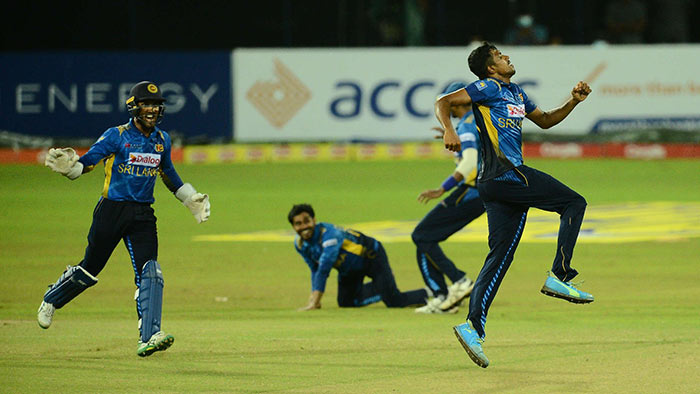 Debutant Maheesh Theekshana produced a stunning performance with the ball to inspire Sri Lanka to a series-clinching ODI win over South Africa.

An unconvincing batting display saw Sri Lanka post a slightly disappointing total of 203-9 after the hosts won the toss for the third and final match.

However, that modest target proved well beyond the tourists, who were undone by Theekshana’s off-spin in an innings interrupted by rain.

Theekshana took 4-37 as the Proteas were skittled for 125, ensuring Sri Lanka secured a 78-run victory in style.

Charith Asalanka, the top run-scorer in the series, was the sole Sri Lanka player to excel with the bat, scoring 47 off 71 deliveries.

Dhananjaya de Silva (31) did threaten to post a big score yet he failed to build on his encouraging start and Dushmantha Chameera added a quick 29 off 39 balls.

But the success of the South Africa spinners, with captain Keshav Maharaj taking 3-38 and George Linde (2-32) and Tabraiz Shamsi (2-31) also excelling, provided clear encouragement for Theekshana and the Sri Lanka attack.

They wasted no time in making inroads, reducing South Africa to 19-3 inside five overs. Janneman Malan (18) and Heinrich Klaasen (22) steadied the ship with a stand of 36 but Theekshana got Malan caught in the slips and then trapped Klaasen lbw either side of Wiaan Mulder (2) being bowled by Wanindu Hasaranga (2-32).

Linde (18) and Andile Phehlukwayo (17) mounted something of a recovery from 54-6, but it did not last, and it was Theekshana who had the final say when he drew an edge from Maharaj.

The selection of Theekshana proved inspirational and captain Dasun Shanaka heaped praise on the 21-year-old at the post-match presentation.

“Theekshana was our trump card,” said the skipper. “He’s more of a T20 bowler but I used him wisely in this match. He’s a real prospect going forward.”

Theekshana, however, was not the man of the match. That honour went to Chameera, who along with Klaasen struck the most fours in a low-scoring contest, finding the rope three times.

He followed up his effort with the bat by taking 2-16, with the early dismissals of Reeza Hendricks and Rassie van der Dussen putting South Africa in a hole they never looked like escaping.