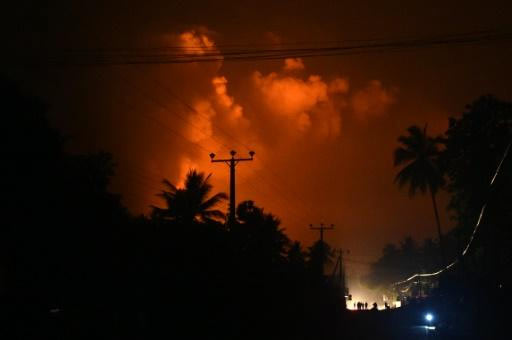 A series of explosions rocked a military ammunition depot on the edge of Sri Lanka’s capital into Monday, sparking huge fires and forcing thousands to flee as debris fell into populated neighbourhoods.

Police said the explosions at the Salawa military post had diminished in strength but nearby residents were being told to stay away because intermittent blasts were still erupting, 10 hours after the first one was reported Sunday evening.

The fire appeared to be largely under control, but the area was still blanketed by heavy smoke as officials tried to determine the cause of the blasts.

At least one soldier died of burns and two others were injured, according to private television network Sirasa, though officials did not confirm any fatalities.

Shortly after the first explosion, residents in Salawa were seen running from their homes in droves as police reported debris hitting the main highway and neighbourhoods.

The night sky was bright with an orange glow as huge fires raged and the area continued to shake every few minutes. Flying debris could be seen from three kilometres (two miles) away, an AFP photographer said, and military officials warned residents not to touch anything that might be an unexploded device.

Police said at least three people were injured and taken to nearby hospitals.

“One of them had been hit on the head by shrapnel, but he is out of danger,” a police official told AFP.

The army stored heavy weaponry and ammunition, including rockets, at the sprawling Salawa camp located at a former plywood factory about 36 kilometres east of Colombo.

“Pretty chaotic scenes on the road,” Deputy Foreign Minister Harsha de Silva, who was travelling in the area, said on Twitter.

“I am estimating that thousands are evacuating.”

Officials urged residents within a two-kilometre radius to stay away until the fire was completely out.

“We have closed the road and asked all residents to leave out of consideration for their safety,” a police officer at the scene told AFP.

Law and Order Minister Sagala Ratnayake said the police Criminal Investigation Department had been asked to look into the cause of the explosions.

“Our priority is to save lives,” Ratnayake told reporters. “But we have already asked the CID to investigate.”

He said the fire had spread quickly to two ammunition depots within the military complex and emergency responders initially struggled to extinguish it because they could not reach the source.

Colombo health chief Palitha Mahipala said all hospitals were on red alert, and 35 ambulances were dispatched to help people affected by the heavy smoke.

Officials declared Monday a holiday for nearby schools and government offices.

The explosion was the worst at a military installation since the end of Sri Lanka’s decades-long Tamil separatist war in May 2009.

In June 2009, there was a similar, but a much less intense explosion at an army ammunition storage facility in the northern district of Vavuniya, 250 kilometres north of Colombo, leaving several soldiers injured.

Government forces crushed Tamil Tiger rebels in a no-holds-barred military campaign that also triggered allegations of up to 40,000 ethnic Tamil civilians being killed in government bombardments.