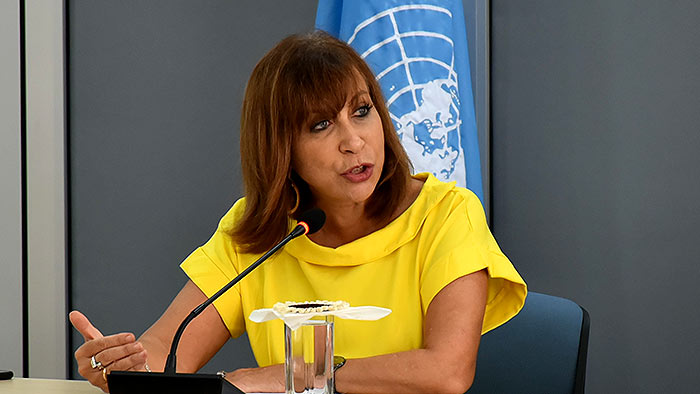 UN Resident Coordinator Hanaa Singer has written to Prime Minister Mahinda Rajapaksa expressing the hope that the existing policy on mandatory cremations will be revised so as to allow the safe and dignified burial of COVID-19 victims.

“I recognise that during epidemics, for reasons of public health, governments often need to take difficult and at times unpopular measures. However, in this case, the negative consequences of not allowing burials seem to outweigh any potential epidemiological benefit. Considering the evidenced-based guidance of the World Health Organization, as well as the commitments of the Government of Sri Lanka to respect and uphold the rights of all communities, I therefore express my hope that the existing policy be revised so as to allow the safe and dignified burial of COVID-19 victims,” she said in the letter.

Singer said that she was following with encouragement recent media reports that the current prohibition of burials of COVID-19 victims in Sri Lanka could be revisited shortly.

“I wish to take the opportunity to reiterate the concerns of the United Nations with the existing Ministry of Health guidelines, which stipulate cremation as the only method for the disposal of bodies suspected of COVID-19 infection,” she said.

The UN Resident Coordinator said that World Health Organization, in its 24 March 2020 and subsequent updated interim guidance on 4 September 2020 on ‘Infection prevention and control for the safe management of a dead body in the context of COVID-19,’ notes that based on current knowledge of the symptoms of COVID-19 and its main modes of transmission (droplet/contact), the likelihood of transmission when handling human remains is low.

“The common assumption that people who died of a communicable disease should be cremated to prevent spread is not supported by evidence. Instead, cremation is a matter of cultural choice and available resources. According to WHO guidance, people who have died from COVID-19 can therefore be buried or cremated according to local standards and family preferences, with appropriate protocols for handling the body,” she said.

She added that she had received impassioned appeals from within and outside the Muslim community that perceive the current policy on burials as discriminatory.

“Against this background, I fear that not allowing burials is having a negative effect on social cohesion and, more importantly, could also adversely impact the measures for containing the spread of the virus as it may discourage people to access medical care when they have symptoms or history of contact,” the UN official added.