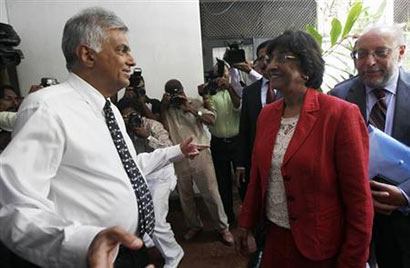 (Reuters) – U.N. human rights chief Navi Pillay hit out against the Sri Lanka government on Saturday, saying that four years after the end of civil war people were still suffering amid signs the country was headed in an authoritarian direction.

“It is important everyone realise that although the fighting is over, the suffering is not,” Pillay told a news conference at the end of a controversial fact-finding mission to assess Sri Lanka’s progress after the 26-year war between the government and separatist Tamils.

“I’m deeply concerned that Sri Lanka, despite the opportunity provided by the end of the war to construct a new vibrant, all-embracing state, is showing signs of heading in an increasingly authoritarian direction.”

Pillay visited the former northern war zones in Jaffna, Kilinochchi, Mullaitivu and the eastern district of Trincomalee, and met leaders in the capital of Colombo. The visit has sparked demonstrations for and against her mission.

Sri Lankan President Mahinda Rajapaksa told the U.N. High Commissioner for Human Rights on Friday that his people believed the U.N. is a biased organisation, and a report she was due to release next month had already prejudged the country.

A U.N. panel has said it has “credible allegations” that both sides committed atrocities and war crimes, and singled out the government for most of the blame.

Pillay said the reconstruction and the redevelopment are important achievements in the former war zones.

“However, physical reconstruction alone will not bring reconciliation, dignity, or lasting peace,” Pillay said. “Clearly, a more holistic approach is needed to provide truth, justice and reparations of people’s suffering during the war.”

She also said that she was concerned about the degree to which the “military appears to be putting down roots and becoming involved in what should be civilian activities, for instance education, agriculture and even tourism.”

Pillay’s visit followed a second U.S.-sponsored U.N. resolution in March this year that urged Sri Lanka to carry out credible investigations into killings and disappearances during the civil war, especially in the final stages.

Sri Lanka has come under international pressure to bring to book those accused of war crimes and boost efforts to reconcile a polarised country. It has rejected the accusations of rights abuses, but Rajapaksa last month ordered an inquiry into mass disappearances.