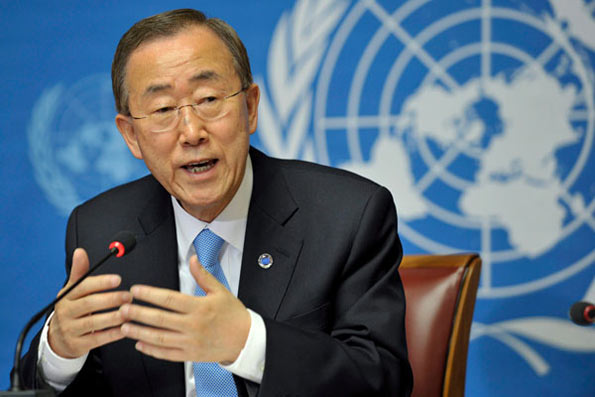 Secretary-General of the United Nations, Ban Ki-moon, accompanied by Mrs. Ban Soon-taek, will arrive in Sri Lanka today 31 August for an official visit.

The Secretary-General is expected to arrive in Sri Lanka in the evening of 31 August from Myanmar, and leave Sri Lanka late night on 2 September for China to participate in the G20 Summit.

Secretary-General will meet Prime Minister Ranil Wickremesingheon 31 August, and will call on President Maithripala Sirisena on 1 September in Colombo.

The Secretary-General will travel to Galle on 1 September, where he will participate in an event involving youth under the theme ‘Reconciliation and Coexistence: Role of Youth’.

On 2 September, the Secretary-General will travel to Jaffna, where he will meet the Governor of the Northern Province Reginald Cooray, Leader of the Opposition R. Sampanthan and members of the TNA, and visit a resettlement site.

During the visit, the Secretary-General will also meet with several Cabinet Ministers including the Minister of Foreign Affairs, Mangala Samaraweera; the Speaker of the Parliament Karu Jayasuriya, Political Party Leaders; and civil society representatives.

At the invitation of the Chairperson and Board of the Lakshman Kadirgamar Institute for International Relations and Strategic Studies (LKIIRSS), the Secretary-General will speak at a public event in Colombo on 2 September on ‘Sustaining Peace – Achieving Sustainable Development Goals’, focusing in particular on Goal 16, namely, the promotion of peaceful and inclusive societies for sustainable development.