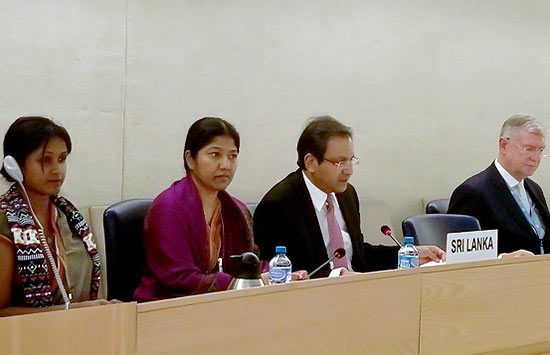 The full statement of the by Permanent Representative Ambassador Ravinatha Aryasinha :

I am honoured to be here today, for the adoption of the final report of Sri Lanka’s review under the 3rd cycle of the Universal Periodic Review that took place in November 2017. I would like to thank the Office of the High Commissioner for Human Rights, the UPR Secretariat and the Troika of Sri Lanka’s review – Republic of Burundi, the Republic of Korea, and the Bolivarian Republic of Venezuela – for their contributions and invaluable cooperation in Sri Lanka’s UPR process.

Out of the 230 recommendations that Sri Lanka received during the very constructive dialogue last November, Sri Lanka accepted 177 recommendations along with 12 voluntary pledges. We have also taken due note of the remaining recommendations made by member states, and we express appreciation to all delegations for their active participation in Sri Lanka’s review and their valuable recommendations.

Sri Lanka is a strong supporter of the UPR process. Its peer review nature allows for open and constructive engagement that encourages countries to address important issues relating to human rights, and to learn from each other. Sri Lanka remains firm in its commitment to this process. We also remain committed to constructive engagement with the UN systems and procedures as well as engagement with individual member states in promoting human rights locally and internationally.

As you are aware Mr. President, Sri Lanka participated in the 3rd review in November 2017 in the backdrop of a renewed and transformed local setting following Presidential and Parliamentary elections in the year 2015 with a renewed focus on strengthening, promoting, protecting and upholding human rights; strengthening democracy, good governance, and the rule of law; reconciliation and sustainable peace; equality and dignity for all; upholding the pluralistic nature of society; and creating inclusive and equitable growth and development in the country.

In the 4 months that have passed since Sri Lanka’s review in November last year, we have already made progress on the implementation of some of the recommendations.

Progress has been made in the drafting of new Counter Terrorism Legislation. We envisage a Counter Terrorism Act that conforms to human rights safeguards and other international standards and we expect the draft legislation to be gazetted for tabling in Parliament for consideration, once the established procedures including translation into local languages are completed, shortly.

The Cabinet of Ministers, on 6 March 2018, approved the formulation of legislation by the Legal Draftsman, for the establishment by law of an Office for Reparations. Once the draft legislation with translations into local languages is finalised, the draft Bill is expected to be gazetted shortly.

Sri Lanka has been and continues to engage actively with UN systems and procedures and across all agencies at all levels.

Sri Lanka received the Working Group on Arbitrary Detention for an official country visit from 4-15 December 2017.

In January 2018, Sri Lanka participated in the review on the implementation of the Convention on the Rights of the Child.

Moreover, Mr. President, amendments were brought to the Local Authorities Election Act and the Provincial Councils Election Act, ensuring a quota to elect female representatives to the Local Government and Provincial Councils which are important grass-root-level decision making bodies. At the recently concluded Local Government Elections held on 10 February 2018, the legislation ensuring 25% quota for women was implemented, securing a record number of women being elected.

For the effective implementation of the National Human Rights Action Plan 2017-2021 which was shared with all delegations in November during Sri Lanka’s review, a three-tier mechanism has now been established to regularly monitor progress being made by all the relevant line ministries and agencies, and to give necessary guidance and direction. All action points specified in the plan are being incorporated into the action plans of the relevant ministries and agencies.

This Council is aware of the recent incidents that took place in certain parts of my country targeting members of the Muslim community who represent an integral part of the pluralistic society of Sri Lanka.

These cowardly acts instigated by some organised groups and individuals who have no place in the democratic, pluralistic society of our country. Such acts go against our shared vision of a Sri Lanka where equal rights and rule of law are guaranteed for all. We are determined to take action against all perpetrators of these incidents in accordance with the due process of the law. Victim compensation processes have already commenced; and arrests have been made as well.

As a result of these incidents, Mr. President, where it was discovered that social media and messaging platforms were being used not only to incite and spread hate and false messages but also to organise attacks, the Government was compelled to impose temporary restrictions on the use of social media. All these restrictions have now been lifted. The Government as a result of this experience has now entered into active engagement with social media operators, particularly facebook, to work on the prevention of hate speech. The emergency regulations which the Government was compelled to impose on 06 March 2018 as a measure to protect communities were rescinded on 17 March 2018.

What was heartening Mr. President, amidst the disturbing incidents, were the acts of compassion of the peace-loving people of my country that came to each other’s help, and the public calls for unity and peace and the denouncing of hatred and violence by key members of the community – the clergy, community leaders, sports personnel, artists, and musicians – cutting across ethnic and religious lines.

We firmly recognise that the UPR should not be a mere three-and-a-half hour dialogue that takes place every four years. Therefore, with technical assistance from the OHCHR, we are already in the process of exploring the best possible mechanism to put in place locally, for regular reporting and follow-up of recommendations emanating from the UPR process as well as other processes including the treaty body reporting and follow-up process. We appreciate the assistance in this regard that the OHCHR has offered us.

Thank you for the opportunity to deliver these remarks. I look forward to listening to the views from the floor from all who will be speaking today.