US panel votes to bar aid to Sri Lanka 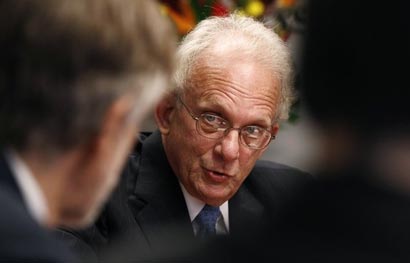 A US congressional committee voted to ban aid to Sri Lanka unless the nation shows “accountability” over the bloodshed in the final stages of its civil war in 2009.

In a voice vote, the House Foreign Affairs Committee approved a measure that would ban all US government funding to Sri Lanka except for humanitarian aid, demining and activities to promote democracy and governance.

The measure — sponsored by Representative Howard Berman, the top member of President Barack Obama’s Democratic Party on the panel — would only allow aid once the administration certifies progress by Sri Lanka on key concerns.

The concerns include “accountability for those involved in violations of human rights and war crimes at the end of Sri Lanka’s civil war,” including members of the defeated rebel Tamil Tigers.

Other criteria include an improved climate for freedom of the press, an end to emergency regulations and information from the government on the fate of people unaccounted for at the end of the civil war.

The US Agency for International Development had requested close to $13 million for Sri Lanka in the 2010 fiscal year.

While the House measure enjoyed broad support, it will not immediately take effect as it was in the form of an amendment for spending in the next fiscal year starting in October. A final package will come through lengthy negotiations between the House of Representatives and Senate.

In 2009, Sri Lanka’s military killed the top leaders of the Tamil Tiger rebels, wiping out an insurgent force known for suicide bombings and recruitment of child soldiers in its decades-long separatist campaign.

The United Nations has said that up to 7,000 civilians were killed in the final months of fighting. A UN report has also spoken of abuses, alleging that the government executed rebel leaders who had worked out a surrender.

Sri Lanka’s military has denied any civilian deaths and said that the footage on the documentary was doctored.

The country has promised that a local panel will take action if war crime allegations are proven but has rejected international calls for a UN-backed probe.

Home » US panel votes to bar aid to Sri Lanka