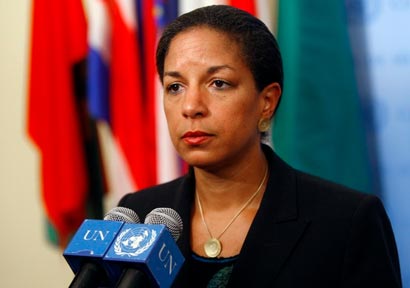 The United States pledged on Friday to assist Sri Lanka’s new government in creating a more open and democratic society.

In a speech laying out President Barack Obama’s updated national security strategy, U.S. National Security Adviser Susan Rice included Sri Lanka alongside Myanmar – which is also known as Burma – and Tunisia as a country “in transition.”

“Certainly have seen some positive steps here,” she told a regular news briefing.

“But there’s such a strong commitment that’s visible in this government to want to address these issues that we very much want to work with them to see that happen,” she said.

The United States is keen to bolster ties with countries throughout Asia as part of its effort to counterbalance an increasingly powerful and assertive China, which has sought strategic influence in Sri Lanka.

The Sri Lankan government said this week it was planning a new investigation into accusations of human rights abuses in the final stages of a 26-year civil war that ended in 2009, amid international frustration at the failure of former president Mahinda Rajapaksa to look into numerous civilian deaths.

Rajapaksa had refused to cooperate with any United Nations investigation into claims the army committed atrocities in the war. He was ousted in a surprise election defeat last month.