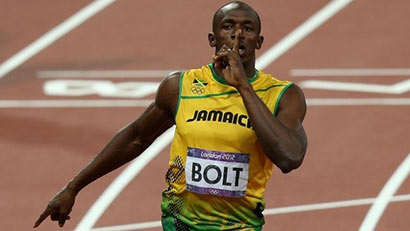 Usain Bolt became the first man to retain both Olympic sprint titles as he led home a gold and green Jamaica clean sweep in the 200m.

Bolt matched Michael Johnson’s then world-record time from the Atlanta Games of 19.32 seconds as he held off training partner Yohan Blake in silver and Warren Weir in bronze.

Blake had beaten Bolt at the Jamaican trials, his last race over the distance before London, but the double 100m champion ran a brilliant bend from lane seven to lead by a metre coming into the straight.

Glancing to his left he was aware of Blake closing in a fraction at 150m, but held his form to cross the line with a finger to his lips.

“This is what I wanted and I got it. I’m very proud of myself,” the 25-year-old told BBC Sport.

“After a rough season I came out here and did it. I thought the world record was possible. I guess I was fast but not fit enough.

“I could feel my back strain a little bit, so all I did was to keep my form. I’m very dedicated to my work and London meant so much to me.”

Blake’s 19.44 secs was a season’s best, while 22-year-old Weir set a new personal best with 19.84 secs to complete the Jamaican party.

But this was Bolt’s race, and these have once again been Bolt’s Games.

A month ago, his form questionable and his hamstrings and back giving him serious problems, there was genuine doubt whether the 25-year-old could retain one Olympic title here in London, let alone two.

Bolt has made those misgivings seem laughable. He now has five Olympic gold medals, the most decorated Jamaican Olympian of all time, and with the 4x100m still to come can make it six before he heads home to the embrace of an ecstatic nation.

On a warm, still summer evening perfect for sprinting, Bolt had clowned around as he waited to be called to his blocks, as ever a study in easy relaxation despite the magnitude of the occasion.

He flirted with the girl looking after his kit and then gave a regal wave before taking his rivals apart from the moment the gun sounded.

While there was no new mark on Thursday evening, this was the joint fourth fastest 200m in history – a display to rank among the best the event Bolt calls his own has ever seen. 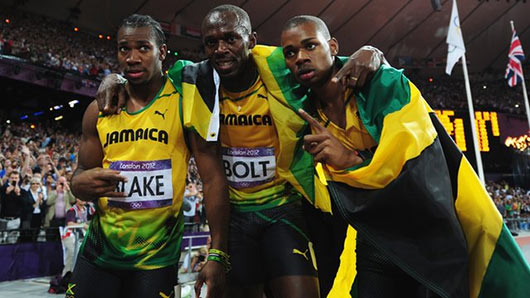