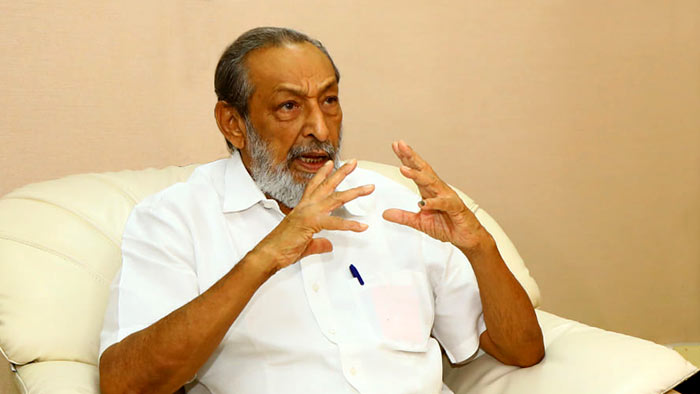 Water Supply Minister Vasudeva Nanayakkara has slammed moves by the President’s office to dissolve the Public Utilities Commission of Sri Lanka (PUCSL), pointing out to Prime Minister Mahinda Rajapaksa that the independent regulator is under the Premier’s purview and not the President’s.

“As the Public Utilities Commission is an institution under your Ministry, any decision related to it must be taken by you,” Minister Nanayakkara, whose subject matter, water, is also regulated by the PUCSL, said in a letter to the Prime Minister on Thursday.

Shutting down the PUCSL could disrupt ongoing and planned consumer services and attract blame towards the Government, the Minister warns. He urges the Prime Minister to stop the dismantling of the regulator as proposed by the President’s office.

Meanwhile, experts stressed that funding–whether private sector investment, bilateral or multilateral–for any projects in sectors regulated by the PUCSL would be less forthcoming if the regulator was dismantled. This includes support from the Asian Development Bank (ADB) which has been a major backer of Sri Lanka’s electricity sector.

On Tuesday, Presidential Secretary P B Jayasundera wrote to Treasury Secretary S.R. Atygalle instructing him “to take necessary procedural steps to close Public Utility [sic] Commission and consequential steps to absorb the technical staff to the Department of National Planning and also deploy such staff to the Ministry of Power and to this office depending on their competencies to serve in respective places on planning and analytical work”.

The letter, which shocked the industry, also said: “As tariff and connected regulatory work is within the Government purview, certain relevant provision in the Public Utility [sic] Commission Act could be incorporated in Consumer Affairs Authority and Ceylon Electricity Board Act when Public Utility [sic] Act is replaced in due close”.

The decision contradicts the Prime Minister’s own recent budget speech in which he said he proposed to amend the Public Utilities Commission Act and the Ceylon Electricity Board Act “to allow the rapid implementation of projects”, Mr Nanayakkara said. There had been no suggestion to shut the PUCSL down completely.

The regulator has been a mediator and arbitrator in consumer disputes, to provide acceptable solutions, he continued. It has taken action, too, to address issues in the water supplies and petroleum sector. It blocked unfair increases in electricity prices, thus protecting users. During the Yahapalana administration, it refused to approve corrupt electricity dealings, thereby preventing massive losses to the Ceylon Electricity Board.

“Efforts by the Yahapalana Government to dilute the powers of the Public Utilities Commission so it could buy electricity bypassing the tender process were defeated in Parliament under your leadership as Head of the Opposition,” the Minister pointed out. He urged the Prime Minister to safeguard the PUCSL on behalf of the Sri Lanka’s electricity, water and petroleum consumers.

Established by the Public Utilities Commission of Sri Lanka Act of 2002, the PUCSL is the economic, technical and safety regulator of the electricity industry and the designated regulator for petroleum and water services industries. It is also assigned as the shadow regulator for the lubricant market.

The establishment of the PUCSL was backed by agencies like the Asian Development Bank which was instrumental also in having the Electricity Act of 2009 passed, allowing the PUCSL to finally operate. Until then, it had been hampered by the absence of enabling legislation.

Like other agencies, the ADB had long emphasised the need for an independent regulator and saw the development as a positive step, industry experts said. It even delayed processing a loan it had on file until the Electricity Act was passed to allow independent regulation.

“From that viewpoint, the abolition of the PUCSL is a serious matter,” one analyst said, requesting anonymity. “That means we’re going back. If there are problems with the PUCSL, there is an Act through which the institution can be corrected. Closing down the PUCSL is not the answer. It is the last thing one must do.”

“Not just the ADB but any development partners, including some bilateral ones like Japan, will have problems,” he continued. “So will the private sector. Having independent regulation and then abolishing it will definitely be seen as going in the negative direction.”

The ADB, which has a project to improve transmission distribution reliability to start early next year, has not yet responded officially.

Meanwhile, the PUCSL has also not been formally told of moves to shut it down and is functioning as normal. In any event, to dissolve it, the 2002 PUCSL Act under which it was set up will have to be repealed in Parliament, lawyers said. Alternatively, another Act could be introduced; or, as it is interwoven with the Electricity Act of 2009, that law could be amended.