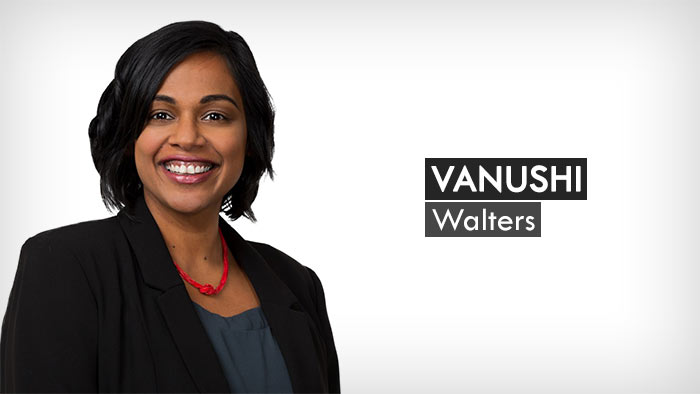 Sri Lankan born member of the New Zealand Parliament Vanushi Walters during her maiden speech to the house on Wednesday made a brief statements in both Sinhala and Tamil and said that human rights belong to all.

“…I was now not only a Sri Lankan but also a New Zealander, my family having arrived in 1987. I felt the rush waking up the morning after my mother told me Richard de Zoysa’s story,” Ms Walters, who is the first Sri Lankan born MP to be elected to the New Zealand Parliament told the House.

“Richard was my father’s second cousin, a journalist in Sri Lanka, killed in 1990 as a result of his courageous criticism of the then Government. The cloak that morning arrived like a wave of outrage. Surely people weren’t being tortured and killed by their own Government, and if they were, the cloak demanded I do something about it,” she said.

The following are excerpts of the speech delivered by Ms. Walters (Labour—Upper Harbour):

“Richard was my father’s second cousin, a journalist in Sri Lanka, killed in 1990 as a result of his courageous criticism of the then Government. The cloak that morning arrived like a wave of outrage. Surely people weren’t being tortured and killed by their own Government, and if they were, the cloak demanded I do something about it.

“It was a story and a feeling that began a 27-year journey in human rights advocacy for me. There is still so much to be done for human rights protection in many countries around the world because human rights belong to all.

“The rush of the cloak was there when I first nervously woke up as a qualified lawyer. It was there the morning after my father, Jana Rajanayagam, had several strokes and heart attacks, after being the finance manager of the Upper Hutt City Council and then the North Shore City Council. In an instant, he was physically unable to work, and, thankfully, received Government support through those tough times. I remember when I woke several years later, the morning after he died. The cloak didn’t rush back that morning, but arrived in slow motion with a new kind of inescapable weight.

“The electricity didn’t seem to stop when I stepped on board the majestic Rainbow Warrior II for an interview as a climate campaigner. It was there, buzzing through a pile of hundreds of letters that sat on the floor of a hotel lobby in Mexico, saved by a former prisoner of conscience, sent by strangers to win him his freedom, and they had. It was there with unhelpful giddiness, when I walked in to sit my final exams at Auckland University and then at Oxford. The electricity danced across the room in Johannesburg as young human rights activists talked, cried, and shared visions of hope about the future of human rights.

“It was there, embodying possibility, listening to stories about my great-grandmother Naysum Saravanamuttu, the second woman to be elected to the State Council of Ceylon in 1931. This is a feeling we should all have, in the work we do and in the relationships we hold. This is the great ambition for all New Zealanders: not only to ensure that we look out for each other when times are tough and we must but to support and connect people with the things that will bring that electricity.

“We have an obligation to continue to address racism and discrimination. Where voices aren’t represented at decision-making tables, we have an obligation to shake the tables. We must not only hear the loud and organised but fiercely listen for piercing silences and work to bring the marginalised and disempowered from the periphery to the centre. We have an obligation to protect all human rights, including economic, social, and cultural rights, and, because rights are meaningless without the ability to access them, we have a connected obligation to ensure sound access to advocacy and to the courts.

We have an obligation to do more, and then more again, to address climate change.

“We have an obligation, as we turn the corner towards the 200-year anniversary of the signing of Te Tiriti, to fulfil its articles. We have an obligation to examine the edges of policy and law, where education impacts justice, where justice impacts employment, and where employment impacts health, and to design bridging policy solutions that recognise lives aren’t lived in select committee silos; they’re just lived. This is how we really disrupt the churn of poverty.

“I want to make special mention of my early mentors: Lecretia Seales, whose keen intellect was matched by her courage; Margie Taylor; Ced Simpson; and Pakiasothy Saravanamuttu, all of whom have had a significant impact on the decisions I’ve made in my journeying”.