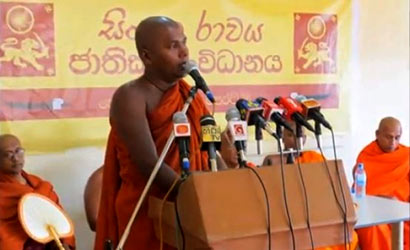 No greater crime in the history of humankind can match the unrelenting and unceasing war that members of the human species are waging almost every moment of the day against members of other species for their flesh and bones. This is the biggest war of human kind being waged from time immemorial i.e. snuffing out the life of other species in an almost one –sided contest without pity without remorse. Kill and eat as a practice has become so ingrained in human society that deprivation of the valuable life of another living being – a life that is so dear to it as much as it is to us humans, is no longer seen as a moral or ethical issue. In closing our eyes to the suffering and death of animals at our hands, and disregarding their cries for help, we suppress some of the most noble impulses that a human being is capable of  generating – that of sympathy and pity towards other living creatures—and by mutilating our own feelings in such fashion we unwittingly become cruel.

Ven. Bowatte Indraratana Thero was very much an exception to this class of people. He stood out. He led a principled life of self – abnegationwithout equivocation. He gave up his life with a salutary noble thought motivated by compassion i.e. to save the lives of other sentient beings including cattle from death and destruction.  Saving the lives of others is as high a noble endeavour as one could ever conceive under Buddhist beliefs and ethics.

An outstanding feature of Buddhism, is that Buddhist ethics are concerned with the behaviour of humans to all living beings and not merely with their attitude to their fellow-humans and to human society. This is a significant difference between Buddhism and Abrahamic religions.

One of the greatest events in the spiritual history of human kind is the laying down of the injunction found in both Buddhism and Jainism – not to kill and not to harm other living beings [Ahimsa]. Jainism requires that the monk should suppress all emotions of hatred and revenge, the Buddha proceeded further calling on mankind to meet all living beings in the whole Universe radiating loving – kindness (Metta).  This is love without clinging (upādāna).

Albert Schweitzer, the world renowned philosopher and physician, says  “The Buddha is the first to express the fundamental law that ethical spirit quite simply in itself means energy which brings about what is ethical in the world”  (‘Indian Thought and its Development’ by Albert Schweitzer, 1935). True ethics invariably require compassion for all living creatures.

A thirteenth century Persian poet, Sa’di summarized the idea of “reverence for life” as follows:

Do not harm that ant that carries a little grain;
It has life and life is sweet.

The idea of consideration for the lives of other living beings is more profound and deep than the idea of humanism, because the former includes all living beings.  Then my neighbor becomes not only a human being but any creature like myself, cat, dog and even a fly subject to similar joys, and similar fears. The world view changes towards an all – embracing view with dramatic changes in life style and attitude. It brings us closer to all living beings.

Further, according to Buddhist teachings when a human being dies the nature of the succeeding life-continuum is determined by the morally wholesome or unwholesome mental impulse that arises in his last conscious moment, that which follows it being his Patisandhi-vinnana, or rebirth-linking consciousness.

Even when his precious life was rapidly ebbing away Ven. Indraratana pleaded the cause of cattle unequivocally and called for the ban on slaughter of cattle.  By any definition these are morally wholesome thoughts and the fact that these noble sentiments occupied the last re-birth linking conscious moments (Patisandhi – vinnana) of the late monk would ensure his stream of consciousness a good re- birth in the realm of Samsara.

Unlike some who have taken a negative view of Ven. Indraratana’s conduct and viewed the early termination of his life as unacceptable, the Buddhist approach to this issue is somewhat different. Buddhism tends to view life against the background of infinity. Samsara is without beginning, and neither is there an end, and there has never been a time according to Buddhism when the round of rebirths did not exist. Consequently, the Karmic history of every living being extends into the infinite past, and each has an unexpected potential of Kamma, good and bad.

Ven. Indraratana devoted good part of his young life to care for the needs of others particularly other sentient beings who are unable to articulate their pain and suffering. He gave voice to their plea for an end to their suffering and an end to man’s inhumanity towards them.  He worked hard to put an end to unnecessary animal sacrifice and incarceration of animals in cages (euphemistically called Zoos).   These are all morally wholesome actions and inspiring to all who sincerely care for the protection and welfare of animals.

The Buddha has clearly laid down that:

“ A man is not noble (Arya) because he injures living creatures. He is called Arya (noble) because he does not injure living beings. (Dhammapada)

Ven. Indraratana has shown he was a dedicated follower of that Noble (Aryan) path.

Reverence for life of other living beings

All life forms possess “the will-to-live in the midst of will-to-live of others”. This we know from our own life as well as observing the lives of other living beings. In the world of living beings there is an intuitive “Will” to live. Through our own experience and realization the right ethical conduct therefore is to appreciate the rights of all life forms and the sacredness of life itself.  The Buddhist First Precept encapsulates this spirit. It is not only a call not to kill others but also to save others wherever possible because the moral basis of the First Precept is reverence for life.

Buddhism accepts kinship with the animal world, a more intimate feeling of community with all that lives. It is not a matter of sentiment but an essential element that is rooted in the total Buddhist concept of life. It is a necessary part of an all – embracing philosophy which does not reject any aspect of experience (The Place of Animals in Buddhism by Anagarika P. Sugatananda (Francis Story) 1964.

The concern for the welfare of animals permeates Buddhist teachings with several references to Jataka Tales and incidents drawn from the Buddha’s own personal life.

For example, the good qualities of animals is the subject of several Jataka stories and in the Jataka Tales, it is clearly shown that in the Sansara (unending cycle of death and re-birth) even the Tathagata has gone through a large number of births in the animal and human worlds.

Ummagga J. (Panna Paramita) –The Tathagata is referred to at the beginning

as  ‘Sakya sinha’  or the Lion of Sakyans

The purpose of these Jataka folk-tales of the Panchatantra type is to teach moral lessons by allegory, but they are also weighty as illustrating the position that animals occupy side by side with humans in the Buddhist world-view. It must be noted that the Jatakas do not exalt animals unduly, for every tale of animal gratitude or affection is balanced by another showing less worthy traits which animals and men have in common ((The Place of Animals in Buddhism by Anagarika P. Sugatananda (Francis Story) 1964.

Events from the life story of the Buddha –

a) The noble horse Kanthaka pined away and died when its master renounced the world to seek Buddhahood. That story has the ring of historical truth.

b) Upon attaining Enlightenment during the period of Sath satiya, a Cobra- Muchalinda had kept  company near the Bodhi tree.

c) The Buddha’s very first sermon the Dhammacakkappavattana Sutta was preached at the Deer Park at Issipatana, Saranath. Deer is considered the messenger of Universal Love in Indian folk lore.

d) In a later episode an elephant, Parileyyaka and an intelligent monkey were the Enlightened One’s companions when He retired to the forest to engage in solitary meditation.

e) When King Udeni had sent his old female elephant which had worked for the king for a long period of time to the jungle, the Tathagata had advised the king to look after animals in their old age in gratitude for the services rendered when they were young and the King had then faithfully complied with that request.

Ven. Indraratana Thero was championing a ban on cattle slaughter for numerous years. He was championing a cause not of his own making but a cause that is held dear by most Buddhists who follow the fundamentals of the Buddha’s teachings that eschew violence on any sentient being.

Ven. Indraratana Thero’s sacrifice conveys a deep message.  The fauna and flora is a natural gift. Peaceful co –existence between man and animal, and man and natural environment is the correct ethical approach.

In a manner similar to the martyrdom of Vietnamese Buddhist monk Thich Quang Duc whose self – immolation in a spirit of self sacrifice on June 11, 1963 in Saigon (now Ho Chi Minh City) turned the tide in favour of the Buddhists of South Vietnam, and became a global role model of peaceful protest as an ultimate gesture when all other forms of  non – violent action had failed, the life sacrifice of Ven. Bowatte Indraratana Thero in a similar fashion on Vesak Day (May 24, 2013) in front of the Dalada Maligawa (Temple of the Tooth) in Kandy, may become a point of reference to galvanise the public of Sri Lanka to move rapidly in the direction of ushering in a ban on cattle slaughter.

In a society where singers, actors, sportsmen and entertainers are increasingly becoming heroes among the young generation and even among some adults, the life story and self sacrifice of Ven. Bowatte Indraratana Thero may well ensure that the noble cause that he championed will not fade away from public memory.  He will become a role model of self – sacrifice and his legacy will survive in history and will influence those who think and listen to their inner voices and are touched by the sufferings of cattle and all other living beings that are victims of Man’s inhumanity.

May He Attain Nibbana