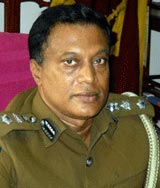 DIG Vaas Gunawardena has been arrested by the CID in connection with the abduction and murder of a businessman in Dompe, the police spokesman said.

The Deputy Inspector General of Police (DIG) for Colombo North was earlier questioned by the Criminal Investigations Department and a statement was recorded from him.

He was initially taken in for questioning on June 06 following the arrested of a Sub-Inspector (SI) and two Police Constables (PCs) over the murder of the 35-year-old businessman from Bambalapitiya. However, he had been released by the CID.

The DIG was questioned again by the CID today regarding the murder which took place on May 22, and subsequently has been arrested.