Who wishes to mourn the LTTE dead? 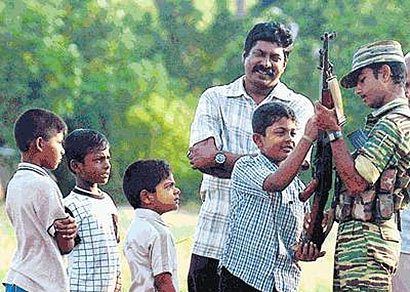 On 18th May 2014, Sri Lanka celebrated the victory over the internationally banned terrorist movement LTTE. Sri Lanka has every right to celebrate the defeat of terrorism and the victory of peace. It came after 3 decades and the loss of civilian lives, military lives, assassinations of politicians, destruction of public property and affected the country’s economy and growth. That peace is now into its 5th year. That victory came at the cost of nearly 30,000 lives of military men who bravely sacrificed their lives so that we could live in peace. There are close to 20,000 injured and disabled military personnel who cannot be forgotten either for their injuries are a daily reminder of the sacrifices made to end terror. Into this equation has come a sudden desire to mourn LTTE dead and it is interesting to know exactly who wishes to mourn these terrorists?

Why would segments of local and international media wish to promote the notion of the right to mourn dead LTTE?

Why would local stooges of international NGOs also demand the right to mourn dead LTTE?

Why would scores of others also wish to mourn dead LTTE?

What connections did they have and what was the type of connection that they would be so vociferous about the right to mourn the LTTE dead?
For a mother, whoever her son or daughter becomes, that son and daughter remains her child. It is this mother who has the ONLY right to mourn for her dead child even if that child is a terrorist. But, that mourning does not need to be made into a public ceremony or a public event and she does not need the entire world to arrange the mourning. It is a mother’s personal mourning and should be made in the privacy of her home or a private place that she deems fit. She does not require agencies, NGOs, foreign diplomats or media to make her case or be present to click pictures and make a sensational story to sell. All that this mother needs to do is place a flower near the picture of her child in her home and utter a silent prayer. It is a private moment between a mother and her dead child.

Who wishes to make this very private mourning a public affair unless it is for publicity purposes and to make a statement that keeps to an agenda? Obviously this is the modus operandi.

With LTTE banned in Sri Lanka no one has any right to demand the mourning of LTTE.

The West is still looking for Nazis’

The very media and international agencies demanding the right to mourn LTTE terrorists may like to be reminded that the West is still hounding Nazi’s even after 69 years!

Diane Cole writing for the National Geographic News states “You can’t hide from justice forever—not even for war crimes committed decades in the past, and not even when you’re 93.” Apparently, Hans Lipschis, 93 who had been a cook at the Auschwitz Nazi death camp has been arrested for complicity in mass murders and will be the first to be charged from among a list of 50 former Auschwitz guards!

Arresting the old and feeble is not even a factor to be considered. If Efraim Zuroff, the Chief Nazi Hunter for the Simon Wiesenthal Center, a global Jewish human rights organization can say ‘”The passage of time in no way diminishes the guilt of the killers. Old age should not provide protection. The fact that they have reached an elderly age does not turn them into righteous gentiles.” – it gives every right to the Sri Lankan Government to continue its intelligence on LTTE and track down all those who had directly and indirectly sponsored or worked for LTTE over the years. Age is no bar for arrests or criminal charges.

With the precedent in place what is the hullabaloo when LTTE members and organizations are being banned by Sri Lanka? Why do some foreign Governments get so upset not to even attend events the host Government has invited when its own country is being slapped with UN reports on violations of human rights? Canada is becoming quite a laughing stock internationally.

Moreover, in view of the numerous commentaries on the war victory taking place what needs to be reiterated is that

Bottomline is all those who took no part in wishing to or working towards ending terror have no right to determine the course of the country post-terror. They chose to work with the enemy and they should have no role to play in determining how the future of Sri Lanka should be modeled. It is also a good message for the Sri Lankan Government that they continue to shoulder plenty of ‘unwinnable war’ promoters and those who have had direct and indirect links with the enemy and the underlying message is that if such people can betray once, betraying again is a piece of cake and they would not hesitate to do so given the largess of the reward or handout.

The people know who these people are and they have no respect from the public and the Government is well advised not to give them strategic roles for it only diminishes the respect for the Government too.

We expect much from the Government for the brave soldiers have fulfilled beyond our expectations and the nation remains ever grateful to them. Our gratitude for the role of the armed forces remain ever strong and inspires the rest of the people to think nationally for it is only those who defend and protect the nation that have any right to dictate how and where the country should be steered.

This is why it is all the more important that Sri Lanka’s education system is reviewed for efforts are afoot to subtly eliminate the pride in Sri Lanka’s national heroes so that the future youth will be absolved of any feeling of wanting to protect the cultural and historical heritage of the nation leaving the country open to cats and dogs to devour our nation. Nationalism and national minded people are being targeted globally through various smear campaigns simply because they want to protect the historical identity of their country.

Only those who value the cultural and historical heritage of the nation and its civilization value have come forward to defend and protect the nation. This has been proven through history from the battles against colonial powers to those that enlisted to defeat the LTTE. It is to them the country must owe its gratitude.

Home » Who wishes to mourn the LTTE dead?