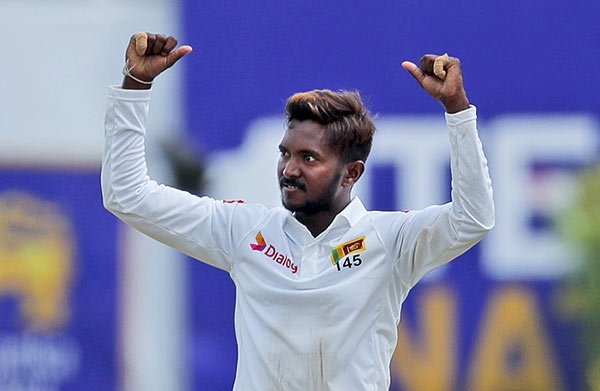 New Zealand captain Kane Williamson and Sri Lanka spinner Akila Dananjaya have been reported for suspect bowling actions after the first test between the teams which ended on Sunday.

The International Cricket Council issued a statement Tuesday saying the report from the match officials cited concerns about the legality of the bowling actions of both players.

“Williamson and Dananjaya will now undergo testing within 14 days from the reporting date and, during this period, both will be permitted to continue bowling in international cricket until the results of the testing are known,” the ICC said.

That means both players will be available to play in the second test of the two-test series, which starts Thursday in Colombo.

Right-armer Dananjaya bowled 62 overs in the first test at Galle, taking 5-80 in the first innings and 1-84 in the second, helping Sri Lanka to a six-wicket win.

He had just returned to test cricket after being banned in December, 2018 for an illegal action. Danajaya was left out of the Sri Lanka team which played a test series in New Zealand that month after failing a bio-mechanical test in Brisbane.

On that occasion the ICC ruled “his deliveries exceeded the 15 degrees level of tolerance permitted under the regulations” and he was required to remodel his action before returning. He had taken career-best figures of 6-115 in a test against England in November, 2018.

Dananjaya enjoyed a meteoric rise in international cricket, being chosen for the preliminary Sri Lanka team for the 2012 T20 World Cup before he had played a professional match. His talent was identified after he had been a net bowler for the Sri Lanka team.

Williamson, a part-time off-spinner, bowled only three overs in the second innings without taking a wicket.

He was banned from bowling in international cricket in 2014 after tests found his elbow extension exceeded the 15 degrees allowed under ICC rules. His remodeled action was later approved by the world body.

The match was umpired by Michael Gough and Richard Illingworth of England, and Andy Pycroft of Zimbabwe was the match referee.