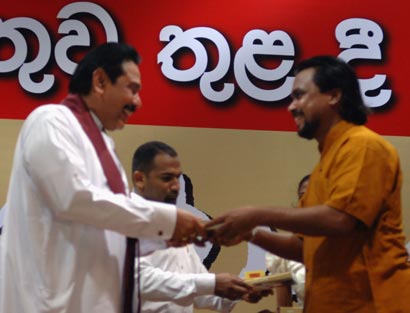 ‘Garu Kathanayaka Thumani’, a book that includes all the speeches delivered in the parliament by Mr Wimal Weerawansa MP was presented to President Mahinda Rajapaksa this afternoon on 24th February.

The new book and a web site for Jathika Nidahas Peramuna (JNF)- National Freedom Front (NFF) was launched at the Temple Trees and the first copy of the book was presented to President Mahinda Rajapaksa by the leader of the JNF, Wimal Weerawansa himself on that occasion. Garu Kathanayaka Thumani is a rare collection of all the exciting and eloquent speeches of former JVP MP Mr.Wimal Weerawansa since his political carrier was started as a member of the parliament in past years. A large crowd gathered at the Temple Trees to participate the occasion.