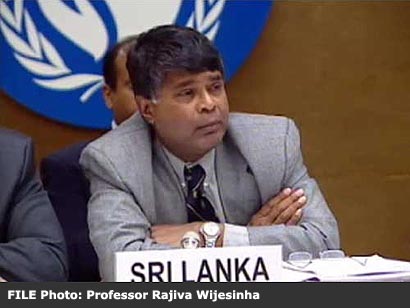 MA: Ok. So may be just for some background first. There has been a lot of discussion around the Panel that Secretary General, Ban Ki-moon has set up to look at alleged war crimes or abuses in the last stages of the war. What’s the government’s response to that?

RW: Well, I don’t think it is supposed to be for looking at war crimes, according to Ban Ki-moon at least, as opposed to all the hype. It’s not to look into abuses, it is to advise him on the best way of proceeding with regard to what he claims is his interpretation of the agreement he signed with the President. I think, if you look at it very carefully, you see Ban Ki-moon is in a bit of a bind, because there’s a lot of pressure on him obviously to make some sort of statement about Sri Lanka. And on the whole he’s been quite good about this, about not letting himself be carried away, but with all this pressure mounting he had to find a way of doing this within the legalities of the UN Charter.

MA: Sorry, he couldn’t actually set up a panel himself but he can set up an advisory group, that’s what you are saying?

RW: Well, he can’t even set up an advisory group which is tantamount to interference in internal affairs of a state, unless he can anchor it in some way on saying, well, he’s got the concurrence of the state, which he definitely doesn’t. So what he did is he claimed – have a look at the terms of reference – that he reached an agreement with the Sri Lanka President last May. There’s a statement, and I don’t know whether you have read it, it’s a joint statement. And the very clear interpretation of that is that there should be accountability, but this is for the Sri Lanka Government to pursue.

MA: So, nevertheless there is an advisory panel that has been set up. What has been the reaction to that, given the context that you’ve just put?

RW: Well, I think that the Government thinks it’s a wrong thing that has been done. In fact, I don’t think you could do better than look at what emerged in the main opposition party, the leader of the opposition thinks this panel is a good thing but the person who is likely to take over the leadership of the opposition said very clearly that he thought this was absolutely wrong.

MA: So, you would say and the Government would say that this really is an interference in the sovereignty of Sri Lankan affairs?

MA: Now, the protests that have been taking place over the past few days in front of the UN Headquarters in Colombo, they’ve been described as I guess very boisterous and as having blockaded the UN staff in there for at least the first day in which they took place. Is this reaction in tune with the public reaction or is this really a much more I guess powerful or strong reaction to this issue?

RW: I don’t quite know what happened yesterday. I read the reports in the papers today which said there had been demonstrations and the staff had not come out. But then it had been agreed obviously that they could leave and they had done so. I think the UN had decided not to call people into work today. I mean, the traffic was disrupted but as you know we don’t have laws against demonstrations in this country. I think the general sense, if you were listening into the Parliament today, and this is said by some people of the opposition as well, is people were quite sharp about the Secretary General. This number 2 figure in the opposition just read out the UN Act and said that, while he’s completely against the actions, the demonstration, the sense was that the Secretary General seems to have overstepped his limits. But of course the sort of people in the joint opposition who were backing General Fonseka, obviously they seem to think there’s nothing wrong with it.

MA: Now the UN itself has protested against this demonstration that blockaded the office, they’ve protested in fairly strong terms saying that they are in favour obviously of the right to protest but are disturbed by the fact the staff may be put at risk or at least couldn’t leave their office. What is your response to that? Do you think these protests went too far?

RW: Well, as I said, I don’t quite know what happened. The paper today seems to imply that everything had been amicably settled and that the UN staff had left, apparently 4 people stayed on but I didn’t read the government paper, I read the 2 independent papers, these indicated that they stayed on their own will and they left quietly later. The problem we all have is, we do believe in the right to demonstrate but each of us gets very upset if we get personally inconvenienced, I mean I was highly irritated because of the traffic block today. But I suppose if demonstrations are allowed you have to put up with such inconveniences. I think as I’ve said yesterday, on Sri Lankan radio, anything that happens has to be viewed within the law, and the law says clearly you shouldn’t be making life impossible for other people. As far as I know life hadn’t been impossible and everything’s ended well.

MA: Now, the Sri Lanka Government has also established a commission and the correct name if I’m not mistaken is the commission for ‘Lessons Learned and Reconciliation’ which is looking, I understand, at the last period of the War as well. That’s being quite strongly criticized by some international Governments and advocacy organizations, given some of the past records of the commission of the inquiry which I understand didn’t actually fulfill or end up fulfilling its mandate. What do you say to the criticism of the latest commission?

RW : Well, I think the criticisms actually ignore the fact that we did set up a commission, indeed several commissions, and many of them have functioned perfectly well. I think there’s some irritation about the fact that the proceedings of the last commission have not been publicized. I think one of the problems that happened with the last commission is that we allowed what’s called an International Independent Group of Eminent Persons to observe and unfortunately not the eminent persons themselves but some of their assistants thought that this was a vehicle for them to object to the current Sri Lanka Government. We had lots of problems because they countermanded the terms under which the IIGEP had been brought in and I’m sorry to say some of these guys were Australians, the assistants. And there were all sorts of problems because it was felt their activities were political., I mean you have this very sad thing today when in Parliament the Minister of External Affairs actually read out from the American State Department report in relation to Sri Lanka which was quite a good report, it said that the Leader of the Opposition was encouraging the US to put pressure on Sri Lanka. And that’s one of our sad things that sometimes not foreign Governments but young people allow themselves to be used to apply political pressures within Sri Lanka and I think these young Australians were very very pally with the opposition at the time and that really was a problem for the IIGEP, but the commission actually made its report which is with the President and action should be taken. I mean, my own view is, if Sri Lanka is guilty of something it’s just for being very slow but I’m someone who happens to think we should act very quickly and compared to other countries we are actually quite quick. As you know when you look at things like Abu Ghraib and the Bloody Sunday inquiries, I think our record is quite quick but for me the sooner you do anything the better.

RW : Any case brought before you with evidence must be investigated. I’ve said this before, for instance the US State Department produced a report last October in which it said we have come across the following allegations and we very much welcome a response and I have constantly said that was a very well put statement because they didn’t presume guilt or innocence or anything, they simply suggested that we should be providing explanations to these and I think very correctly the Government said yes, I mean you know we welcome any allegations that are not blind or generalized. We made a distinction between that and the Channel 4 allegations which have been completely fraudulent. And one of the things we said about Channel 4, we said this to Phillip Alston, I’m sorry another Australian, when he said ‘Please investigate’, we said ‘Are you asking us to investigate a video or are you asking us to investigate an incident? If it’s an incident, tell us when it happened, where it happened or at least give us some clue.’ And Phillip Alston has constantly refused to answer these questions. And we told him if he didn’t know the answers, to check with Channel 4 or whoever informed them, I think he actually failed to get an answer from Channel 4 because, if you look at his last report, Channel 4 seems to have refused to even give him the original of the video. So we have a situation where people make general allegations and we’re not into looking into generalizations that do not give specifics but we have consistently said that if you give us incidents, we will look into them.

MA: And so you are saying that up to this point there have been no accusations that have sufficient evidence or sufficient details for you to feel that there’s a justification to launching an investigation?

RW : No, I haven’t said that at all, I have told you that the American report contains details and I think we should respond to them. In fact, the last time I was discussing this, I said, ‘Haven’t we replied yet?’ and in fact I was told that the report was imminently due.

I had actually pointed out earlier that I had answers to about half those allegations, because you know one of the reasons why we get a bit irritated is that, as Head of the Peace Secretariat, I used to monitor Tamilnet every day and get down any allegations that seemed to me to indicate inappropriate behaviour and I would get reports from the military at the time. And I have to tell you this, I still remember this statistic, the air force used to come out with very precise statistics, for obvious reasons any bombing raid was very carefully recorded, and for instance in a certain period there had been 458 raids and even Tamilnet only alleged civilian casualties in 29 of them. And of those 29 instances, 22 were instances in which only 1 or 2 civilians were alleged to have died. Now, 1 or 2 civilians dying is 1 or 2 too many, but it is certainly obviously not a case of either deliberate targeting of civilians, obviously not, nor is it prima facie evidence of carelessness. I mean you just compare that record – I’m afraid you guys are in Afghanistan as well – with what you people have been doing in Afghanistan, and the collateral damage is colossal compared to us. And I’m not talking now of government, I’m talking of what I used to look at in Tamilnet and I used to monitor this. So I do think it’s a bit highhanded of people to suggest they are concerned about human rights and we are not. We were, because these are our people.