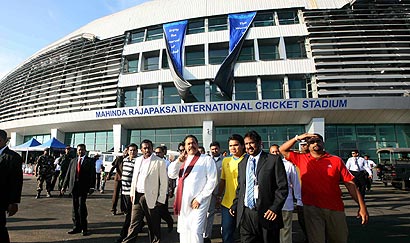 The newly constructed Suriyawewa Hambantota International Cricket Stadium which was named after the President of Sri Lanka has become the main show piece in the cricketing and sports world this morning when it hosted the inaugural match of the ICC Cricket World Cup-2011in Sri Lanka. One major reason behind such enthusiasm is Suriyawewa Stadium is one of the brand new stadiums that have been set up especially for 2011 Cricket World Cup in sub-continent where not a single international cricket match been played including the host nation.

However, while the island nation eagerly waited to witness the inaugural match of the newly built stadium in the deep south of Sri Lanka, Mahinda Rajapaksa International Cricket Stadium in Sooriyawewa, Hambantota was declared open today on 20 February under the auspices of the Speaker Chamal Rajapaksa to host the Sri Lanka vs. Group A minnows Canada match. The inaugural match of the stadium is not only the first match of the Group A but also be Sri Lanka’s first match in the 2011 ICC World Cup.

Later in the day President Mahinda Rajapaksa also visited the stadium to watch the cricket match being played between the Sri Lankan and Canadian teams. Speaker Chamal Rajapaksa, Minister of Sports Mahindananda Aluthgamage, Namal Rajapaksa MP, Chief of President’s Staff Gamini Senarath and High Commissioner of Canada Bruce Levy were also present at the occasion to witness the historic match.

This is the largest ever cricket ground built in Sri Lanka to date measuring 200 meters by 200 meters. It has 32,000 seating capacity and equipped with the state-of-the-art facilities such as score boards, a seven storey splendid pavilion with comfortable seats, parking space, a modern sophisticated lighting system for day and night matches and everything expects of an International venue.

Throughout the day, Hambantota was blessed with a bright sun shine that added glamour to the picturesque newly built stadium as well as to the inaugural match and also added momentum to the district. Today’s match was a complete sell-out and packed to its full capacity. With huge ‘Let the celebrations begin’ and ‘Welcome to Hambantota’ banners were in place along the roads to welcome the fans to Hambantota where never such a game was played of this nature. 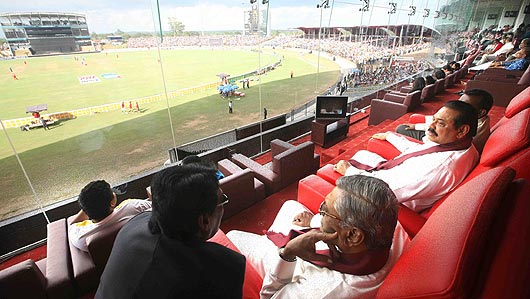