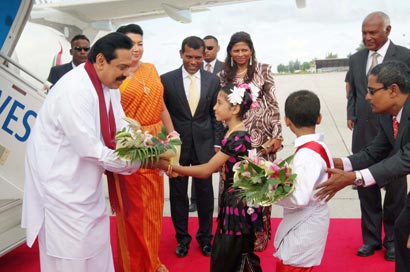 President Mahinda Rajapaksa warmly received upon his arrival to attend the SAARC Head of States Summit by his Maldivian counterpart at the Adduagan airport in the Maldivian southern town of Addu island city this morning on 09 November.  President of Maldives Mohammed Nazif, First Lady Madam Laila Ali Abdulla and the Foreign Minister Ahmed Naseem ceremonially welcomed the Sri Lankan President, First Lady Madam Shiranthi Rajapaksa and the Sri Lankan delegation at the airport. The Sri Lankan High Commissioner in Maldives Dickson Dela and the High Commission officials were also present. A guard of honour was also conducted in honour of the President.

The 17th South Asian Association of Regional Cooperation (SAARC) state leaders’ summit organized at the Hithadhoo Conference Centre in Addu island will be held for two days from 10th to 11th November. The 17th Summit themed ‘Building Bridges’ is expected to review the progress in the implementation of the decisions taken in earlier Summits.

Meanwhile, the SAARC foreign ministers’ meeting was kicked off today prior to the summit. Minister of External Affairs professor G.L. Peiris is already in the Addu city to attend the summit. They will focus attention on the agendas prepared for tomorrow’s summit by the SAARC Standing Committee and the SAARC programme committee which met last two days.
President Rajapaksa is addressing the Summit on November 10th, the first day of the Summit. He is also scheduled to hold bilateral talks with his regional leaders on the sidelines of the Summit.
The Sri Lankan delegation is comprised of First Lady Shiranthi Rajapaksa, Minister of Power and Energy Champika Ranawaka, parliamentarians Sajin Vaas Gunawardene, A.H.M. Aswer, Kamala Ranathunga and President’s Secretary Lalith Weerathunga.

The SAARC was created in 1985 in Dhaka with seven members, including Bangladesh, Bhutan, India, Nepal, Maldives, Pakistan and Sri Lanka. Afghanistan joined the regional cooperation in 2007. Cooperation in SAARC is based on respect for five principles of sovereign equality, territorial integrity, political independence, non-interference in the internal affairs of Member States and mutual benefit. Sri Lanka held the Chairmanship of the Summit from August 2008 to April 2010.

Meanwhile the Maldivian government has finalized all necessary measures to hold the 17th SAARC state leaders meeting in very grand scale tomorrow. Sri Lanka plays a major role in providing security in the summit. STF has been deployed for the VIP security. 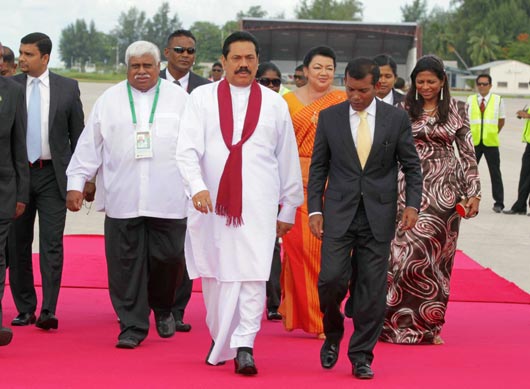 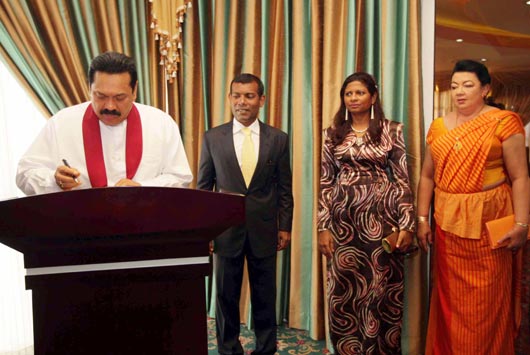