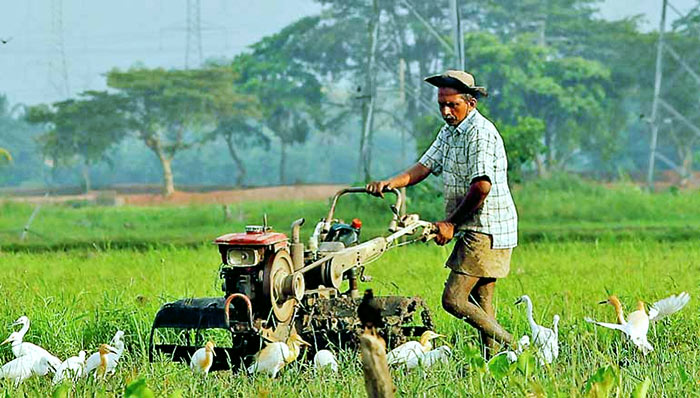 The country’s economy in 2017 had grown by only 3.1%, the slowest rate in 16 years and lower than the 4.4% achieved in 2016, as per data released yesterday by the Department of Census and Statistics (DCS).

The four major components of the economy – agriculture, industry, services and taxes – less subsidies on products have contributed their share to the GDP at a current price by 7.7%, 27.2%, 55.8% and 9.3% respectively for 2017.

DCS said Sri Lanka had experienced inclement weather since 2016. The agriculture sector of the economy has been badly affected mainly due to the unfavourable weather conditions, severe drought as well as heavy rainfall, which prevailed during the last two years in many districts of the country, and as a result the agriculture sector has reported negative quarterly growth rates in all quarters other than the fourth quarter of 2017.

As a result, the agriculture sector has reported a 0.8% negative growth rate for 2017. During 2017, the highest growth rate of 3.9% was reported for overall industrial activities. Services activities have grown by 3.2%, compared to the previous year.

In addition, the sub-activity of ‘Mining and quarrying’ recorded 5.9% of the growth rate. During 2017, manufacturing activities which come under industrial activities had grown by 3.9%. The major proportion of the generated gross value added of this sector is shared by the two activities of the ‘Manufacture of food, beverages and tobacco products’ and ‘Manufacture of textile and wearing apparel’ which have reported significant growth of 1.5% and 5.7% respectively during 2017.

8.6% and 6.7% respectively when compared with the previous year. The value added amount of ‘Electricity, gas, steam and air conditioning supply’ has increased by 2.7% over the period under consideration.

Among the three major activities (agriculture, industries and services), the services activities which correspond to the highest contribution (55.8%) to the GDP, recorded a positive growth rate of 3.2% during 2017, when compared to the previous year.

The performance of the services sector was underpinned especially by the sub-activities of ‘Programming and broadcasting activities’,

On Friday, the DCS briefly released the 2017 GDP data only to be withdraw it soon after.

“We got the last set of data at the last minute. We released the GDP data but since this is the last quarter we need to calculate the full year data and revisions,” A.J. Satharasinghe, Director General at the State-run Department of Census and Statistics, told Reuters.

“It’s a long process so we withdrew the data as we can’t allow even a slight mistake in the data. We are recalculating and compiling everything. We will release the data in one or two days.”