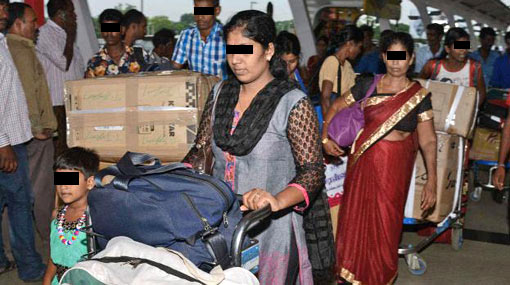 About 40 Sri Lankan Tamil refugees from various camps located across Tamil Nadu will be leaving for the island nation on Friday under the voluntary repatriation programme of the United Nations High Commissioner for Refugees (UNHCR).

The individuals from 14 families have been living in camps located in Coimbatore, Dindigul, Erode, Karur, Namakkal, Pudukkottai, Salem, Sivaganga and Tiruchi districts.

They will leave for Colombo from Tiruchi international airport, The Hindu reported.

This is the first batch of refugees returning to their native villages with UNHCR assistance this year. According to UNHCR sources, each of the refugees would be able to carry an additional 20-kg baggage, besides the 30 kg they are normally entitled to.

“They are leaving under the voluntary repatriation programme. Each one of them is entitled for an air ticket, a travel allowance of Rs. 750 for coming to the airport from their camps.

Once they reach Colombo, our officials will receive them and they will be given re-integration allowance and travel allowance,” sources said.

A total of 852 refugees from various camps in Tamil Nadu returned to their native villages in Sri Lanka with assistance from UNHCR during 2016.