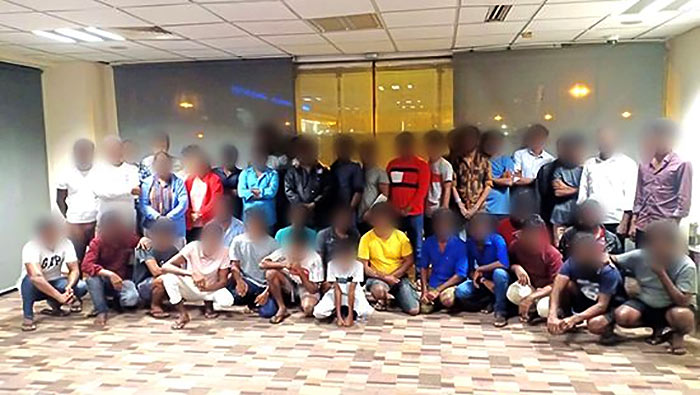 46 Sri Lankans who were arrested by the authorities of the Réunion Island of France were repatriated to Sri Lanka by air yesterday evening (January 13).

Reportedly, the group of Sri Lankans were apprehended as they were attempting to migrate to the Réunion Island illegally by sea.

The group, comprising 43 males, three females and a young boy, had set aboard a multi day fishing trawler from Negombo on 02 December 2022, and were apprehended on 24 December 2022 upon their attempt to illegally enter the Réunion Island of France.

While being identified as residents of Jaffna, Kilinochchi, Mullaitivu, Mannar, Batticaloa, Chilaw and Negombo, aged between 13 and 53, the Sri Lanka Navy reported that the group is due to be handed over to the Criminal Investigation Department (CID) for onward legal action.

The smugglers who facilitated the illegal migration attempt have also been identified as residents of Dehiwala, the Navy stated, adding that fees ranging from Rs. 200,000 to Rs. 4,500,000 had been charged from each individual.

Thus, the Sri Lanka Navy warned the general public to remain vigilant of such scams, emphasising that the French government does not entertain such illegal activities and that those who attempt to enter the country illegally will be repatriated upon apprehension.