A Lesson from Dr. Subramaniam Swamy to Sri Lanka’s minority Tamils and Muslims 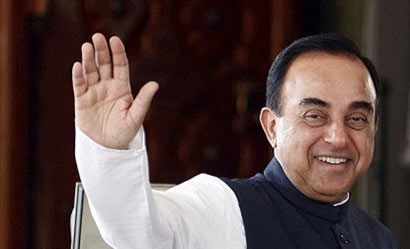 Known for his candid demeanor and straight talk, Dr. Subramaniam Swamy did not mince his words during his eagerly awaited speech at the 4th consecutive Defense Seminar held at the Galadari Hotel from 18-20th August 2014. Encapsulating the gist of Dr. Swamy’s message was the need for minorities in particular the Sri Lankan Tamils to become stakeholders of the Sri Lankan nation and not think themselves separate entities needlessly inclined towards voting for their own only or expecting and appealing for external parties to come to their aid.

What was made clear through reference to Rajiv Gandhi was that India today acknowledged the ‘mistake’ his mother Indira Gandhi made in training and aiding Sri Lankan militancy that gave birth to a host of armed Tamil movements which ultimately ended up with LTTE after LTTE had killed off all the other leaders.

Acknowledged also was that today India under Modi is happy that LTTE is no more and India is happy that Sri Lanka took the decision to ‘fight to finish’ a victory that provided ‘security for India’ that culminated in the end of the LTTE except for what Dr. Swamy termed as the ‘financial orphans’ who need to once in a while cough LTTE ideology to get allocations from the LTTE kitty now involved in numerous other international illegalities.

The next part of Dr. Swamy’s speech alluded to the elections that enabled a clear majority and established how the unification of the Hindu majority could create an outright majority. The lesson in this for minorities was very simple.

In continuously self-alienating, complaining of what is not given against not appreciating what is enjoyed, demanding what cannot be given, looking from the lens of rights without responsibilities the insinuation implied was that in the event the majority unites not only will the minorities become insignificant, the external players that have preyed upon the minorities for their own agendas will also walk away having realized that they are now irrelevant.

In what can be described as an excellent piece of advice to the minorities and relevant to both India and Sri Lanka, Dr. Swamy’s request for minorities to become stakeholders and to think strategically and not emotionally or ethnically is important and minority leaders are best advised to realize the new dynamics at play.

Expanding what Sri Lanka can accept as the new Modi doctrine is the new path that India espouses to take wherein India’s national interests would not bow down to narrow local interests. Honorable as this new shift is, the Indian Central Government reaction and action following a graphic that appeared on a Sri Lankan Government website for which an immediate apology was offered and yet for over a week an unwarranted show of misbehavior was allowed certainly questions the manner India’s Central Government remains to be haunted by State theatrics. Nevertheless, the fact that India has announced a new shift in its policy elevating itself to a newer plane has to be appreciated and commended.

India will not support a separate Tamil country

India will not come to Tamil’s defense

The most important message that Tamils need to take from Dr. Swamy’s speech was that India will not support the notion of Tamils as a separate entity. Expanding further Dr. Swamy requested Tamils not to expect India to come to the defense of Tamils. Essentially, what Sri Lanka’s Tamils need to now think is that they are not part of Tamil Nadu or India but part of the fabric of Sri Lanka. They would need to break away from the psychology that India or Tamil Nadu can come to the defense of Sri Lankan Tamils. If India’s stand on this is as Dr. Swamy projected, India would need to ensure that statements from the Centre, its officials and even State Governments do not give a different meaning or indication that India’s interests continue to rest with the Sri Lankan Tamils. Therefore, just as important as delivering the message, it would be good for Dr Swamy to ensure that India means what it says.

In drawing reference to himself as a Tamil, Dr. Swamy expressed that neither Karunanidhi nor Vaiko were Tamils but from Andhra Pradadesh and that even the Tamils of Sri Lanka were originally from Kerala/Malayali.

In drawing an example from the Presidential election, Dr. Swamy explained how he could not understand the mentality of the Northern Tamils in their argument of claiming genocide by the Sri Lankan Government while choosing as common candidate the former Army Commander and voting for him. He expanded this further in the manner how the Sri Lankan President had invited the Northern Chief Minister to accompany him to Mr. Modi’s oath ceremony but Chief Minister Wigneswaran had declined because he did not wish to accompany the President of Sri Lanka but as Dr. Swamy said the Chief Minister’s psychology was part of the problem – he was not a head of a sovereign state and should not think so either!

Thus, from the speech by Dr. Swamy, himself a Tamil, what was made abundantly clear was that the Tamils need to urgently shift their current psychology towards looking at themselves as part of the Sri Lankan family and not thinking that they are a separate entity.

Tamils of Sri Lanka are well advised to realize that with the pace with which the economic development cutting across Asia is taking place and the geopolitical security emphasis, India is now unwilling to be bogged down by domestic petty politics that have no nation-wide significance for India.

Before Tamils become irrelevant by their own actions, a lesson for Sri Lanka’s Muslims who are being taken down the same mistaken path that the Tamils first embarked on, it is no better a time for both the minorities to realize that instead of self-alienating themselves by their actions and inactions, they need to become stakeholders.

The minorities need to now think themselves as Sri Lankans putting their ethno-religious inclinations to the background and this holds the key to peaceful co-existence. Dr. Swamy showed how the unification of the Hindu majority in India at the recent election displayed that until and unless the minorities become part of the governing cycle and desiring to be part of the country’s historical heritage they would by their own actions become irrelevant with time and this is not a path that the minorities should take. The greater lesson is that external parties are ever ready to pitch in to aggravate mischief if and when they see a window of opportunity to create the destabilizing plots to their advantage, when they realize there are no windows of opportunity they would abandon the very minorities that they used like a ton of bricks. This was the bitter lesson Saddam Hussein, Gaddafi and Osama bin Laden learnt. In the larger game of politics it is nothing but a game of being used and discarded after use.

The stand on the UNHRC investigation was also made clear by Dr. Swamy who said that India would not accept anything ‘intrusive’ and highlighted the imbalance with which the investigation was being done with LTTE only given a peripheral mention in all reports.

With India’s stand clear on UNHRC investigation, the need for Tamils to think and belong to Sri Lanka instead of thinking themselves as belonging to a separate state however looks to be a distant dream so long as Tamils allow entities like the Tamil National Alliance to drag them towards self-alienation and irrelevance.

The best example of this is the manner that 33 TNA provincial councilors have written to the UNHRC outgoing head Navi Pillai to expand the UNHRC war crimes to include the atrocities committed by SLFP and UNP Governments since 1974 to determine that genocide was committed. When Sinhalese and Muslims have been killed in their thousands there are no grounds for genocide which even Dr. Swamy mentioned in his speech. Nevertheless, the TNA demand has reverse repercussions for it includes virtually all of LTTE’s crimes and would also help to confirm and establish the LTTE-TNA link and thus with the LTTE ground leadership no more it would certainly help establish the argument that if LTTE is found guilty of crimes the TNA leadership must take accountability.

There is much for the minorities to ponder over amongst themselves and the need to delink themselves from ethno-religious minority political parties is a good starting point for these parties funded by mischief operators will take the ordinary people to devastation as can be seen in other parts of the world.

1 Response to A Lesson from Dr. Subramaniam Swamy to Sri Lanka’s minority Tamils and Muslims