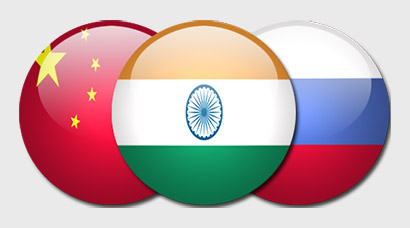 Should the 3 powers of Asia combine to make a formidable global force? Its not a bad idea – in fact it’s an excellent idea and would provide Asia and inadvertently the world the balance of power and stability that is lacking. Against a declining West, Asia’s 3 formidable power houses are best placed to challenge USA’s supremacy but the only issue is India’s mixed signals and its colonial-servant attitude in bowing to Western dictates. Yet, given the current world scenarios, Russia, China and India should combine and together as a common block enforce their demands to their “friend” the US and the West.

The triangular partnership was first mooted by former Russian PM Yevgeny Maximovich Primakov and today in the light of the West’s pursuance to militarily interfere citing humanitarian concerns should make the Asian giants realize the need to safeguard their interests (internal and external).

The power of the 3 nations combined is phenomenal. The 3 nations make up more than 40% of the world’s population and the significant rise in their economies would provide greater nation-to-nation links that would also entail a rise in the economic conditions of all Asian nations as well given that the nations still hold a wealth of natural resources that the West are desperate to take over.

The total area of the 3 nations is 29.96million sq.kim (22.5% of the total area of the world) – this clearly predicts potential human resources, huge potential of market and rich natural resources between them. China has common borders with Russia and India. If security poses a risk to the three nations individually once the three tie up to form a partnership the entire region will be protected. Russia can keep an eye on NATO while China can watch the USA. The 3 foreign ministers have already kick-started discussions and Sri Lanka must take every opportunity to encourage this partnership at even external ministry level.

As a possibly move towards that direction no sooner the President of China assumed office he headed to Russia to meet his counter part Putin. Symbolic meaning was that inspite of West’s relationship deteriorating China and Russia’s was not.

Crux of China’s relationship has always been not to be dependent on any single-nation source. It’s a lesson Sri Lanka simply ignores. Relationships with China means that while China assures a nation they can depend on China, China will seek trade where it is offered the best leverage. These are all hallmarks of straight-forward preconditions which Sri Lanka’s officials again lacks – though Mrs. Sirimavo Bandaranaike managed not only to continue ties with India and Pakistan but had the greatest of relationships with China. The leaders today can certainly take a leaf or two from her book.

Russia and China are very clear about their common positions on the value of sovereignty in international affairs and China’s own choice of staying out of a countries internal affairs – in particular both will not allow Syria, North Korea and Iran from collapsing. These are clues as to why Sri Lanka needs to continue the ties with China and Russia and forge partnerships that compliments each others security concerns in the entire region.

Small as Sri Lanka is, Sri Lanka is the gateway to East from West and West from East it is thus in an enviable position.

If the West views Sri Lanka as a geopolitical tool – China, Russia and India’s views cannot be far different. The only problem is our leaders have yet to discover how to use our geopolitical advantage to Sri Lanka’s benefit and Governments continue to neglect the role of its Ports as a strategic logistical tool on all fronts. For starters corruption in these areas need to be seriously looked into from secretary level downward. It moots the need to perhaps consider amalgamating the Defense and External Ministries together given that national security and external affairs are complimentary and need to go hand in hand. Mr. Gomin Dayasri’s father, Mr. N Q Dias was the Secretary of both Defense and External Affairs under the Sirimavo Bandaranaike Government,.

Moreover, the Asian nations are beginning to see how the West is plotting to again plunder their nations. They have been quick to ponder over the establishing of a new international lending institution to challenge the IMF/World Bank global monopoly with one more suited for the “developing world”.

The formation of BRICS – Brazil, Russia, India, China and South Africa has come up with that alternative source of development fund. The BRICS nations have a foreign currency reserve of $4.4trillion and already trade between BRICS nations is about $282billion annually and the 5 nations together make up 17% of global trade.

Then in comes the Ugly American – and India is offered permanent member status at the UN Security Council, aligning as America’s ally in Asia – when India is in Asia why would it want to aspire to be selected as an ally. It is India that should be picking its allies given that India is placed in Asia and not America. Then the warmth turns to arm twisting with threats of sanctions if India does not reduce oil imports from Iran. So the US is all out to turn India into another Japan and has to a great extent succeeded given that India was led by a foreigner inclined towards the West and its ideologies. With a nationalist Indian now in power, India needs to wake up and realize it is taking the baton towards the wrong direction and needs to refocus towards East.

The US visits are clear indications of how hard the US is lobbying to ensure India does not tilt towards China and Russia. Following visits of President Obama and former Secretary of State Hillary, 5 cabinet level US officials have arrived in India in 2012 itself signaling tremendous pressures upon India to turn West and not East. India did however under pressure cancel Walmarts plan to enter India – something Sri Lanka needs to also learn to do. Saying no is sometimes far better than saying yes and regretting later.

We have China and India both accelerating rapidly and Russia returning to the great power status it once held – there is no reason why the three cannot combine to make a formidable global force that would help protect themselves and their Asia neighbors. There is no reason why Sri Lanka should not align itself to this block given that we are an Asian nation.

The Russia-China-India strategic alliance is the best way forward for their own interests and that of the entire Asia region and even the world at large and Sri Lanka’s officials must encourage this at diplomatic levels.