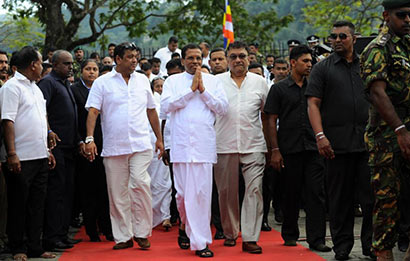 Sri Lanka’s new government promised a tolerant new era of religious harmony and political freedom for the Indian Ocean island nation after years of mounting repression under the decade-old regime defeated in an election on Friday.

In an address to the nation on Sunday, President Maithripala Sirisena vowed to put an end to the corruption and nepotism that marred the reputation of his predecessor Mahinda Rajapkasa, who stepped down after his shock defeat.Speaking from the highland jungle city of Kandy, the seat of Sri Lanka’s last Sinhalese kingdom that also houses a tooth believed to belong to Buddha, Sirisena asked for the continued support of religious minorities who helped him win the election.

“While protecting the country’s main religion Buddhism, we also protect the rights and freedom of Hindu, Muslim, and Catholic people in practicing their religion and create consensus among them to build up this country,” he told a large crowd.

Sirisena’s speech came as the country prepares to receive Pope Francis, who is expected to bring a message of inter-faith dialogue when he arrives on Tuesday.

Rajapaksa became a hero to many for ending Sri Lanka’s 26 year civil war with a crushing victory over the Tamil Tiger rebels in 2009. But critics accused him of crimes at the brutal end of the war and he also oversaw an era of censorship, attacks on religious minorities and persecution of political rivals and journalists.

He ignored pressure to address rights issues and ensure media freedom even after a U.S.-backed United Nations resolution was passed in March that urged the country to prosecute war criminals.

Sirisena, who was acting defense minister under Rajapaksa in the final stages of the war, is unlikely to accept a U.N. war crimes probe, but has vowed to rein in graft and rights abuses.

“I consider it is our duty and responsibility to ensure an unbiased and impartial police service to maintain law and order,” he said in a short speech that contrasted with Rajapaksa’s long-winded discourses.

“I will take all the steps to eliminate corruption, loopholes, and bribes completely from this country.”

Sirisena has already ordered the country’s Telecommunication Regulation Commission (TRC) to lift a ban on all news websites blocked under his predecessor’s regime.

“They will be given full freedom,” a spokesman said.

Rajapaksa pulled the plug on scores of news websites after they criticized him, his younger brother Defense Secretary Gotabaya Rajapaksa, other family members, and his government’s decisions on the war.

Several news organizations were shot at or suffered arson attacks and several journalists were killed during Rajapaksa’s rule. Others sought refuge overseas.

Rajitha Senaratne, a lawmaker who acted as spokesman for Sirisena during the election campaign, on Saturday called on exiled dissidents and journalists to come home, and said the media will be free to criticize the new government.

“I urge all the exiled journalists and dissidents to return to this country to work for this mother land,” he said.

“Media houses will not be torched, Senaratne said. “All the past killings and attacks of journalists will be probed. Also there won’t be any phone tapping as in the past.”