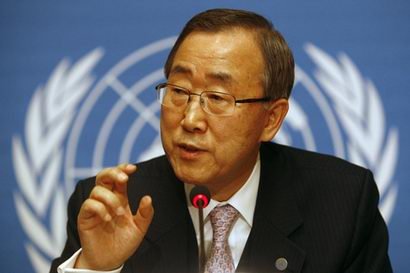 The UN has said it has prepared an action plan to prevent human rights violations in countries after learning from the final phase of the military conflict in Sri Lanka, the world body’s chief has said.

UN Secretary General Ban Ki-moon said a ‘Rights Up Front Action Plan’ which has now been introduced is based on what a UN Panel of Experts learned from the situation in Sri Lanka.

“As you know, I established a Panel of Experts and the Panel of Experts requested me to see whether the United Nations had done…Addressed properly,” Ban said while addressing a year-end press briefing at the UN Headquarters yesterday.

“We had a very serious internal review. As a result of this we established this very important action plan. Of course, this ‘Rights Up Front Action Plan’ is not aiming at any particular country or any particular case. This will be used for all countries and all cases, all situations,” he said.

The Panel appointed in 2011 was headed by Marzuki Darusman, a former Indonesian Attorney General, and consisted of Yasmin Sooka of South Africa and Steven R Ratner, a US attorney.

Ban said the action plan has been submitted to the UN General Assembly (UNGA) with his strong recommendation and the UNGA President has circulated it to the member states to be used as a sort of guideline to protect human rights and prevent any further possible human rights violations in any case.

“I am very firm. We discussed this matter even this morning among our senior advisers,” he said.

Sri Lankan government was critical of the report by the panel of experts and slammed it as having “fundamental deficiencies, inherent prejudices and malicious intentions”.

It said and that it was “legally, morally and substantively flawed”. – PTI