ALL SET FOR LG POLLS TODAY 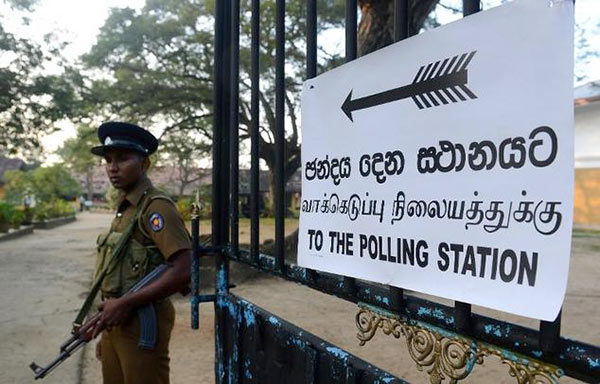 Everything is in place to conduct the much awaited ‘Local Government Elections 2018’ today.

This is the first time that islandwide Local Government (LG) polls are being held on a single day making it the largest election in the country.

The newly introduced mixed-member proportional system sans preferential votes will be practiced for the first time at this election.

The elections will be held for 340 out of the 341 LG authorities.

The election to the Elpitiya Pradeshiya Sabha had to be postponed due to an interim injunction issued by the Supreme Court following a petition received against it.

Out of the total number of members, 60 percent will be elected through the First-Past-the-Post System and 40 percent through the Proportional Representation (PR) system. There are 4,750 single member wards and 169 multi-member wards.

This is also the first time, 25 percent quota has been reserved for female representation.

A total of 56,066 candidates have entered the fray from the ticket of various political parties and independent groups. A total of 15,760,867 registered voters are eligible to exercise their franchise at around 13,374 polling centres.

The Election Commission said the voting would commence at 7.00am and end at 4.00pm.

The voter, this time around, only needs to cast a single vote for preferred political party at the ward level. He or she will not have to choose a preferred candidate, but the list of candidates contesting from each party and independent groups will be displayed at the polling stations. The first election result is expected before the midnight today.

Election monitoring groups, Campaign for Free and Fair Election (CaFFE), People’s Action for Free and Fair Elections (PAFFEREL) and Centre for Monitoring Election Violence (CMEV) observed an atmosphere conducive to hold free and fair election prevailed in the country. They observed incidents related to pre-election violence and internal clashes in political parties were comparatively less this time around as there was no competition among the candidates for preferential votes.

All government schools were closed yesterday in view of LG Elections. The postal vote for the LG elections held on January 22, 25 and 26. The Election Commission had accepted around 560,000 applications for postal voting.

The estimated cost to conduct the LG Elections was approximately Rs 4 billion.

The last Local Government Elections were conducted in 2011 in three stages on March 17, July 23 and August 10.