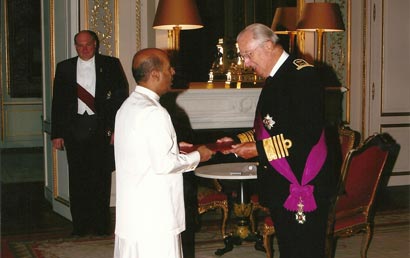 The Royal Castle in Brussels hosted a grand ceremony of the presentation of credentials by Sri Lankan Ambassador Extraordinary and Plenipotentiary to the Kingdom of Belgium P.M.Amza to His Majesty King of the Belgians Albert II. Newly appointed Sri Lankan ambassador to Belgium presented his letters of credence to Belgian King Albert II, at the Royal Laeken Castle in Brussels.

After credential ceremony, the Ambassador had an audience with the King during which he conveyed the greetings from President Mahinda Rajapaksa and the goodwill of the people of Sri Lanka to His Majesty the King, a spokesperson at the Sri Lankan embassy in Brussels said. In the discussion Ambassador Amza and King of the Belgians Albert II discussed the development of Sri Lanka-Belgium bilateral relations, placing the most emphasis on the promotion of economic co-operation. In the course of audience the current status and perspectives of development of bilateral mutually beneficial relations between two countries in various spheres was discussed, he further stated.

His Majesty also congratulated the Ambassador on his accreditation and highlighted the long-standing cordial relations that exist between Sri Lanka and Belgium.

Mr P.M.Amza is an eminent and highly experienced career diplomat. He served as Deputy Chief of Mission in the Sri Lanka Embassy in Berlin, Germany in recent past and also as the Deputy High Commissioner in London. Mr Amza who was appointed as the Acting High Commissioner in the UK for eight months from 01 January to 30 August 2012, was the Deputy Director (East Division) and Acting Director of East Asia and Pacific Region at the Ministry of Foreign Affairs.

Prior to his London appointment Mr Amza also served as Second and First Secretary in Cairo, Egypt and Singapore respectively in the early days of his career. Mr Amza was Deputy Chief of Protocol from May 2004 to January 2005. In February 2005, he was appointed as Chief of Protocol. Mr Amza demonstrated unparallel level of ability and consummate skills as a diplomat when he assumed duties as Deputy High Commissioner in Chennai, South India in the run up to the conclusion of the war against terrorism in Sri Lanka. Before joining the diplomatic service Mr Amza was in the Sri Lanka Education Service as an Assistant Director from 1988 to 1996. His qualification includes BSC, MA Degrees and extensive training at the University of Virginia, USA, University of London and Ministry of External Affairs in India.

During his tenure in London at a very difficult and crucial time as the Deputy High Commissioner of Sri Lanka in the UK, Mr Amza was very popular among all walks of people. He is the only Sri Lankan diplomat to enjoy a grand reception to bid farewell as a goodwill token for his outstanding performances and contributions in Westminster Hall at the Houses of Parliament hosted by the Chairman of the All Party Parliamentary Group for Sri Lanka in the British Parliament, Rt Hon the Lord Nesaby PC on 06 February 2012. Number of Lords, parliamentarians, diplomats and a cross section of Sri Lankan expatriates were also invited to witness the grand occasion.