While at the First Conference of Heads of State and Government of the Asia Cooperation Dialogue (ACD) Summit, President Mahinda Rajapaksa took the opportunity to meet the Sri Lankan community in Kuwait. The audience with the President was organised by the embassy staff under the guidance of Mr C.A.H.M.Wijeratne, the Ambassador of Sri Lanka for the State of Kuwait.

The president called on the community living in Kuwait and all other Diasporas living across the globe to play an important role as ambassadors in rebuilding their country and befalling peace and tranquility to their home land. He accentuated that it is inevitable the Sri Lankan community in general gets involved in the country’s progress and development and to have suggestion, finance and endorsement in rebuilding the country which was savaged by thirty years of brutal terrorism.

President Rajapaksa further stated that in fact, Middle East workers’ remittances to Sri Lanka are the highest in South Asia with figures doubling in the past 7 years, an estimated migrant population of 1.6 million and an annual outflow of 200,000 Sri Lankan workers. Remittance’s inflows are expected to reach $6 billion, addressing 70 % of the country’s trade deficit. The Sri Lankan government, along with many other Asian emerging economies, has acknowledged the importance of remittances in national development and has thus created several incentives to improve the inflow of money sent by migrant workers into the country. The government created the foreign employment ministry aimed at improving migrant working conditions in foreign countries and dealing with migrant worker affairs. Moreover, the government has introduced incentives to facilitate foreign employment, and has aimed to provide more benefits, the President further added.

The colourful ceremony began with a cultural performance from Kandian Dancing troupe, with the lively audience chanting patriotic songs. Amidst cheers of visible joy, President Rajapaksa entered the hall filled with an atmosphere of unmistakable pride. As the President went around the hall to meet the Sri Lankans the cheers grew louder and louder as community members from every corner of Kuwait gathered to the ceremony hall wanted to show their presence and greet the President.

Accompanied by members of their family and friends the participants of the meeting thanked President Rajapaksa for the elimination of terrorism and also mentioned that they are happy with the peaceful transition and the new dawn to the nation. They urged him to eradicate the wide spread corruption too. The community also thanked Mr C.A.H.M.Wijeratne, the Ambassador of Sri Lanka for the State of Kuwait and the embassy staff for their hard work towards the success of the President’s tour and arranging the audience with the President. 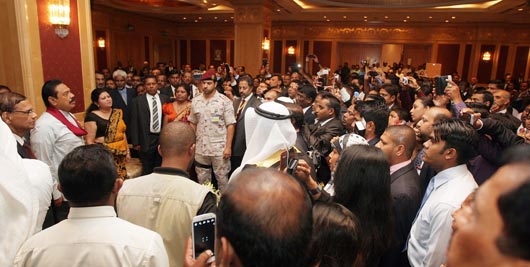 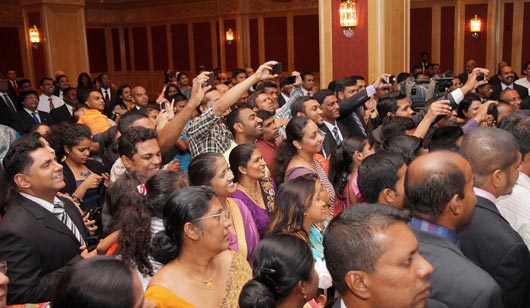