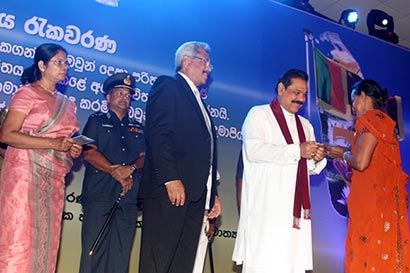 Monthly allowance of Rs. 750 for each parent

The inauguration ceremony of the ‘Ranaviru Mawpiya Rakawarana’ accounts was held today (18th October 2012) at Temple Trees under the patronage of His Excellency the President Mahinda Rajapaksa.

Under a concept of the President to recognition and felicitate the sacrifices and support rendered by the parents of war heroes, the ‘Ranaviru Mawpiya Rakawarana’ scheme was launched. The Ranaviru Seva Authority will spend Rs. 450 million per month towards this meritorious act. Under the scheme each parent of security forces personnel who served in the tri forces during the period from 01st January1983 to 19th May 2009 and parents of police officers will receive Rs. 750 every month.

Parents of war heroes who sacrificed their lives or became disabled during the war are also entitled to this special endowment. 4000 parents of Security Forces personnel received the accounts at the inauguration ceremony today. This unique scheme will be the first such welfare programme in the world.

Ranaviru Seva Authority will grant Rs.750 for each parent and both father and mother of a person will receive Rs.1500 monthly. Around 468,000 parents of the Army, 79,000 from the Navy, 30,000 from the Air Force and 50,000 from the Ranaviru Seva Authority and Police are to receive the benefits of this programme. This will be facilitated through four state banks such as Bank of Ceylon, Peoples Bank, National Savings Bank and the Regional Development Banks. Money will be credited to their own accounts where no other will be able to withdraw.

Speaking at the event His Excellency the President Mahinda Rajapaksha said that even though the war is over the state will not compromise matters related to national security. He said that the government is committed in continuing the welfare of the war heroes and also their families. Reminding the selfless services of the security forces the President emphasized the need to safeguard the welfare of the families of the ones who sacrificed much to safeguard the country.

Speaking further he said that much of the funds allocated for national security in the annual budget are spent on salaries, uniforms, maintenance and fuel for the security forces. Even after the end of the war the government has done much to uplift the living standards of the war heroes and their loved ones, and furthermore Defence Services Colleges and educational scholarships have been established for the benefit of the children of security forces, he added.

In addition to Ranaviru villages thousands of houses have been constructed for the families of war heroes and the Seva Vanitha Units of the security forces are involved in this endeavour. Special programmes to bring out and showcase the innate talents of the security forces personnel have made them ‘stars’ in the local entertainment scene he further stated. The President reminded that there is coveted effort by some anti peace quarters to undermine the efforts of the country by making false and baseless allegations.

A large number of distinguished guests including Ministers, Members of the Parliament, Chief of Defence Staff, Commanders of the Navy and the Air Force, Inspector General of Police, former Chairperson of the Ranaviru Seva Authority Major General Palitha Fernando, Director General of Media Centre for National Security and other dignitaries including Senior Officers of the Security Forces were present.