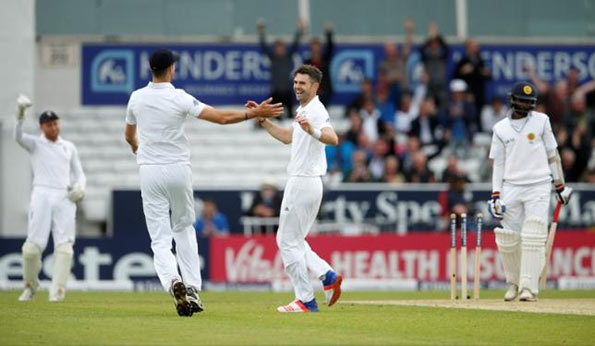 England fast bowler James Anderson took five wickets to inspire the hosts to a crushing victory over Sri Lanka by an innings and 88 runs in the first test in Leeds on Saturday.

Anderson claimed 10 victims in the match as Sri Lanka crumbled to 119 all out in their second innings on the third day after being asked to follow-on at Headingley.

“Sometimes you take it for granted, but watching Stuart (Broad) and Jimmy go about their business was a pleasure to captain,” England skipper Alastair Cook told reporters.

Anderson had Dimuth Karunaratne (seven) and Kaushal Silva (14) caught by wicketkeeper Jonny Bairstow in another probing spell in the morning before rain forced the players off for an early lunch with Sri Lanka on 77 for two.

Spinner Moeen Ali forced Dinesh Chandimal, on eight, to chop the ball on to his stumps before Kusal Mendis, dropped twice, became the first Sri Lankan batsman to pass fifty in the match.

Broad forced Sri Lanka captain Angelo Mathews to nick another catch through to Bairstow and Mendis, on 53, was bowled by Anderson off the inside edge.

Dasun Shanaka’s unhappy stay at the crease ended when he edged Anderson to Bairstow, the ninth catch of the match for the flame-haired keeper who scored a brilliant 140 in England’s innings to lead them to a total of 298 after an early collapse.

“Jonny Bairstow was batting on a different wicket to the other 21 players in this match,” Cook said.

“The first time I saw him I thought he would play for England and he’ll go from strength to strength.”

Rangana Herath chipped Steven Finn to Broad at short extra cover and the touring side limped to tea on 116 for seven.

England wrapped up the last three wickets in 10 minutes.

Dushmantha Chameera was caught by Nick Compton at short leg off Finn for a duck, Lahiru Thiramanne edged Finn to Joe Root at second slip for 16 and Anderson bowled Nuwan Pradeep to complete figures of 5-29.

The 33-year-old right-armer, who overtook India’s Kapil Dev during the first innings to become the sixth-highest wicket-taker in tests, claimed 10 victims in a five-day match for the third time in his career.