A Buddhist monk from Sri Lanka was assaulted by three unidentified persons on board the Tamil Nadu Express, just as it arrived at Chennai Central Railway Station on Monday.

This is the second such attack in three days, the first being on a monk at the Big Temple in Thanjavur on Saturday. The government railway police (GRP) have intensified checks on all trains and tightened security in stations across the State to prevent similar incidents from recurring.

According to police, 19 tourists from Sri Lanka had left for Bodh Gaya on March 3 and were returning to Chennai on Monday. Among them, was W.M.K. Bhandara (33), a monk from Kandy. They were in the S-6 compartment. The train chugged into platform six of the station at around 7.15 a.m. “Just as it came in, three persons — one of whom was wearing a cap and sporting a beard — jumped into the coach and started attacking the monk clad in saffron robes,” said a vendor.

The other Sri Lankans in the compartment tried to stop the men and raised an alarm. GRP officers who were on another platform, rushed to their aid, but the men had fled by then.

The police said the attack on Mr. Bhandara had been quite brutal. “They slapped the monk, hurled abuse at him and hit him on the leg with a blunt object,” an officer said.

The monk sustained injuries on his left leg and the group lodged a complaint with the GRP in which they said they had been carrying Rs. 40,000 in cash, which they found missing after the assault.

“Mr. Bhandara said he did not need any medical treatment. However, he requested a police escort until he left the city. We took the group to the Mahabodhi Society in Egmore,” said a police officer.

One attacker has already been identified, police said, and a hunt is on for him, the officer added.

The question worrying the police however is how the men found out that the monk was travelling on the train. “We checked CCTV footage and saw the men arriving on the platform. But we still don’t know how they had this information in advance,” a railway official said.

The railway police also said that the crew of a Tamil news channel was present on the platform when the attack took place. The police have taken the crew’s footage and are also questioning them. (The Hindu) 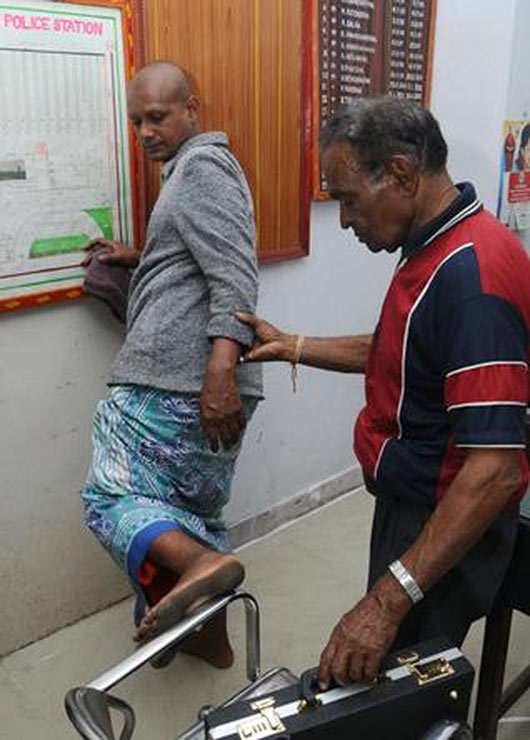 14 Responses to Another Lankan monk attacked in Tamil Nadu