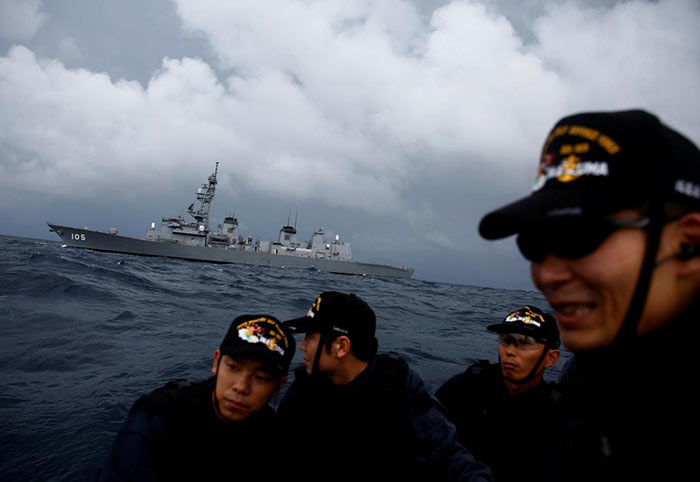 Japan has long provided low-interest loans and aid to Sri Lanka, helping it transform Colombo into a major trans-shipment port tapping the artery of global trade just south of the island that links Europe and the Middle East with Asia.

Beijing has, however, emerged as a powerful rival across South Asia and beyond as it implements its Belt and Road infrastructure initiative.

Both China and Japan are also flexing their military muscles further from home. China’s navy is increasingly venturing beyond the Western Pacific and into the Indian Ocean as it targets a world-class blue water fleet by 2050, while Japan’s military diplomacy is flourishing under Prime Minister Shinzo Abe.

“Japan’s government is promoting a free and open Indo-Pacific and this deployment in the Asia Pacific is a component of that strategy,” Rear Admiral Tatsuya Fukuda, the commander of the Kaga and its destroyer escort, said in his cabin as the carrier steamed for Colombo through the Indian Ocean.

“Maritime security and stability is of critical importance” to an island nation like Japan, he added.

On its way to Sri Lanka, the 248 meter (814 ft) ship was shadowed by Chinese frigates in the South China Sea and carried out naval drills in the Philippines and Indonesia. It also drilled with a British Navy frigate before docking in Colombo on Sunday with 500 sailors and four submarine hunting helicopters aboard.

As part of the goodwill visit, the Kaga’s crew also brought packets of colorful origami paper, crafting flowers for local children who came to tour the ship soon after it docked.

The visit was intended to reassure Sri Lanka of Japan’s willingness and capability to dispatch its most powerful military assets to a region where China is growing in influence.

“Sri Lanka, as a hub in the Indian Ocean, and upholding its commitment to a free and open Indian Ocean, welcomes naval vessels from all our partner nations, to interact with Sri Lanka’s Navy,” said Sri Lankan foreign ministry spokeswoman Mahishini Colonne. “Several navy vessels from our partner countries have visited Sri Lanka this year already and the ship from Japan, a close bilateral partner, is welcomed in the same spirit.”

Sri Lanka recently agreed to cede control of the new $1.5 billion Hambantota port on its southern coast to China Merchants Port Holdings in a bid to ease the debt burden it has accumulated with Beijing.

Tokyo’s diplomatic counter-offensive has included a visit in January by Minister of Foreign Affairs Taro Kono, the first by a top Japanese diplomat in 16 years. In August, Japan’s defense minister also went to Sri Lanka and visited Hambantota.

“Sri Lanka is a key country within the region and a core part of Japan’s open and free Indo-Pacific strategy. A monopoly by any country at a Sri Lankan port would run counter to that,” a foreign ministry official told Reuters, asking not to be identified because he is not authorized to talk to the media.

In March, Sri Lanka’s President Maithripala Sirisena visited Tokyo for talks with Abe, who despite being constrained by a constitution that forbids the use of force overseas, has sought a greater role for his military in the region.

That has worried China, and could be an issue as Abe prepares to travel to Beijing to meet Chinese President Xi Jinping.

“The message to China is that Japan with India and the United States and of course Sri Lanka has the capacity to engage militarily,” said Nozomu Yoshitomi, a professor at Nihon University in Tokyo, and a former Ground Self Defence Force major general who advised the Japanese cabinet.

Such naval forays are a recent change that for some veteran sailors on the Kaga was unexpected.

“When I joined, we would sail out for the day and train from morning till night. I never imagined that we would be deployed on actual missions like this,” said Command Master Chief, Yasuhara Tohno, a 35 year navy veteran.

The Kaga is half-way through a two-month deployment that will see it visit India next.

In the last five years, Japanese naval vessels have stopped in Sri Lanka 50 times, according to Fukuda.

But the Kaga’s new role as a big stick of Japanese diplomacy is for some influential military experts in Japan foolhardy because it means deploying ships away from where they are needed more.

“I am strongly against it,” said Yoji Koda, a retired admiral who is now a fellow at the Fairbank Center for Chinese Studies at Harvard. “Our navy was tasked to kill submarines in the Western Pacific and guarantee the safety of U.S. naval forces. That is enough, we can’t do anymore things.”

Japan has one of the biggest and most advanced navies in the world with more than 40 destroyers, four helicopter carriers and around 20 submarines.

“We undertake far more missions than we did in the past. That means we are stretched in some areas but it is our job to complete the job with the equipment we have,” said Fukuda, Kaga’s commander.

While arguments over the future role of Japan’s navy rage on within the MSDF and defense ministry, proponents of overseas operations appear for now to have gained the upper hand as Abe seeks a larger regional security role for his country.

That could eventually lead to the acquisition of fixed wing aircraft carriers, two military officials told Reuters, asking not to be identified because they are not authorized to talk to the media.

Doing so would put it in an exclusive club of countries including the United States, Russia, Britain and more recently China that able to project air power over long distances.

Details on Tokyo’s plans may come before the end of the year, when Japan’s defense ministry will publish two papers outlining its security goals and military procurement plans for the five years beginning in April 2019.

Separate military sources earlier told Reuters those documents will include a commitment to acquire vertical takeoff and landing (VTOL) F-35B stealth fighters that could be flown from the deck of the Kaga or its sister ship the Izumo.