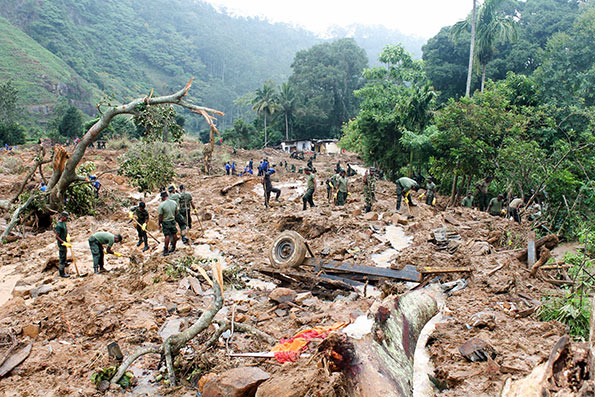 Sri Lanka is planning to begin testing its first web-based disaster damage and loss reporting system by the end of the year, authorities say.

The Disaster Management Center (DMC) is developing the program and training public officials on its use, said Srimal Samansiri, the DMC assistant director.

The program will enlist at least one government official from each district – or a representative of a non-governmental organizations in some cases – who is linked to disaster management and who will be tasked with uploading information.

The data then will be fed to a national data base maintained by the Treasury at the Finance Ministry.

“For example, if it is the road sector, we would have the district engineer who would upload data on affected or closed roads, damages and closures,” Samansiri said.

The DMC official said that the request for such a program had come from the Treasury in mid-2015.

“They were very keen to get precise up-to-date information so that they could plan relief efforts,” he said.

Right now, information about losses and damage from problems such as flooding, landslides and drought is collected in a less-coordinated way. Administrative officials in affected districts collect data and send it to their district offices, which then send it to the DMC or other government bodies coordinating relief.

“There is no uniform system to report the damages or calculate losses, which is hampering disaster planning measures,” Samansiri said.

A clear example came during heavy floods in May. The Disaster Management Center said that 691 houses had been destroyed while 4,888 had been damaged between May 15 and May 22.

However, Finance Minister Ravi Karunanayake said the government expected housing damages to be higher. He said around 128,000 likely were damaged and at least a sixth of those would need complete rebuilding.

There have also been discrepancies in the number of fatalities and people missing reported by the DMC and the Sri Lanka Red Cross. The DMC data shows 89 deaths and 102 missing from May’s disaster, while the Red Cross says the missing could be above 200, citing available population records.

“The problem arises because untrained personnel are collecting data for various departments. There is no uniformity in the collection or in the reporting,” said Jagath Mahedra, the DMC head for Kegalle District, one of those worst affected by the floods. He said a uniform reporting tool would minimize errors in data collection.

The new reporting tool is being funded as part of a $110 million World Bank Climate Resilience Program.

The bank recently released a disaster risk assessment for Sri Lanka and said that a robust damage and loss reporting system was vital for future planning, particularly in the face of growing climate change pressures.

“The biggest short-term challenges facing the government of Sri Lanka are twofold: the lack of a centralized damage and loss data collection system able to report information related to the damage and losses borne by different sectors, and the lack of disaster risk assessment tools,” the report said.

The report also said that the island frequently faced extreme weather, which was having a recurring impact on the economy.

“Over the long term, the combined average annual loss … from natural disasters is estimated at Rs 50 billion ($380 million),” the report said. In particular, Sri Lanka was likely to see an “annual expected loss” of $240 million from flooding and $80 million from cyclones and high winds.

The UN Food and Agriculture Organization assessed that the May floods increased food prices by 4.3 percent within a month of the disaster. In particular, “fresh vegetables prices increased nonstop on reduced output,” it said in an August update warning of more expected price escalations.

“With such recurring losses we need a properly developed reporting mechanism,” Samansiri said. The new tool will be partially unveiled by December, after which there is likely to be a year of testing.

“After we have an idea how it works, it would go public,” Samansiri said.

1 Response to As disaster losses mount, Sri Lanka develops tool to track them