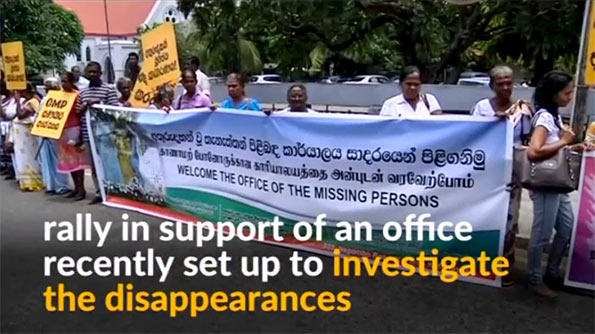 Human rights activists and families of missing people rallied in Sri Lanka on Tuesday (August 30) in support of an office recently set up to independently investigate the cases of thousands of people who vanished during the government’s long conflict with Tamil Tiger rebels.

Protesters marched silently through the streets of the capital Colombo, later gathering at a busy intersection holding up placards and banners supporting the Office Of Missing Person (OMP).

The U.N. Human Rights Commission last year urged the government to investigate disappearances including those of people who were alleged to have been secretly abducted by state-backed groups and paramilitaries during the 26-year conflict which ended seven years ago.

“The tragedy of the issue of missing persons is that the crime is not only about that person but the future of their families, especially the future of women,” said Nimalka Fernando, a human rights activist at the march.

Former president Mahinda Rajapaksa’s government rejected the U.N. recommendations citing that it wanted to address human rights concerns without international pressure. Rajapaksa was unseated in January last year and become an opposition legislator after he lost his prime ministerial bid in August.

Juan E. Mendez, a U.N. human right expert, said earlier this year that estimates of the numbers of missing people ranged from 16,000 to 22,000 from the time of the conflict and its immediate aftermath.

Chandrika Bandaranaike Kumaratunga, a former president and head of the new government’s reconciliation office, told journalists recently that an estimated 65,000 people are thought to have gone missing in the conflict since 1983.