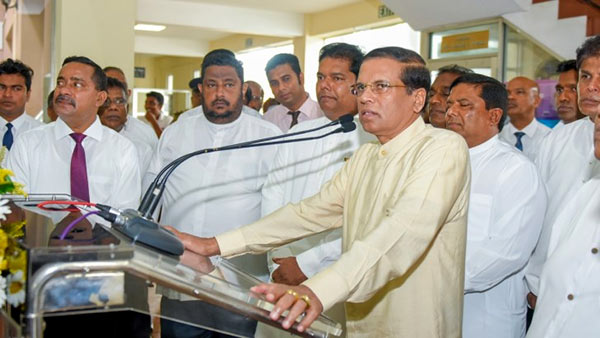 President Maithripala Sirisena says the people have to face disastrous situations like flooding and landslides because the politicians focus only on preferential vote base instead of development necessities.

He further said that people have to face this situation because some politicians work only to get votes at the next election and they do not provide assistance to implement development projects initiated by the Government.

President Sirisena said that even after painful and tragic experiences like this all the politicians should join to implement development plans of the Government while apprising the real circumstances to the public.

He made these remarks participating in a special District Coordination Committee meeting held at the Galle District Secretariat, yesterday (01).

During the meeting, the President said that many years ago, all the Governments were in power endeavored to implement development plans for Rathnapura, Kalutara and Galle districts after conducting feasibility reports, those attempts were unsuccessful due to the intervention of some politicians.

The President extended his gratitude towards all the media institutions, philanthropists and voluntary organizations for their contribution in providing relief measures for the affected people.

The President inquired into the progress of the programmes initiated to provide relief to the affected people in the Galle district and he instructed the officials to carry out relief work continuously for those in welfare centers.

He also instructed that the delivery of the dry rations and other goods among the people must be done without any intervention of politicians.  “Those activities should be carried out by the District Secretary and government officers”, he said.

The President directed to the officials to provide a report on the urgent repairs to be done in the damaged schools, hospitals and roads in the district. He stated that the reconstructions of the semi-damaged houses should be done with assistance of the tri-forces and Civil Security Department.

The President, who met , the relief work officers of the district, commended their service rendered to the victims. President Sirisena handed over donation collected by the people for the flood victims to the Secretary of the Galle District.