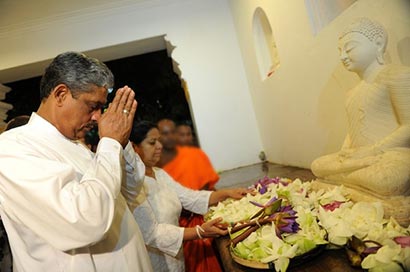 As a strong message to the politicians who govern the country, the most venerable Agga Maha Panditha   the Supreme Maha Nayaka of the Sri Lanka Amarapura Sangha Sabha  Dauldena Gnanissara said that  “Dasa Raja Dharma” should be practiced by rulers when the former Army Commander Sarath Fonseka visited him for blessings.

The ten virtues that should be practiced, called Dasa Raja Dharma, the most supreme patriarch advised  the rulers to follow among others include  freedom from illwill, enimity, envy and bearing no grudge called “Akkodhaa” and non opposition and non confrontation called “avirodha.”

The most venerable Dauldena Gnanissara said so when the former Army Commander sought his blessings at Vidya Wijayarama temple at Pagoda , Nugegoda .

In response former commander of  the army said he will very doggedly follow the Dasa Raja Dharma the venerable Maha Nayaka advised. He also  jokingly said, “I did not even get the ten cents wages a prisoner convicted for rigourous imprisonment ought to get from the government.” He has been also deprived of his pension for his 40 years military services.