At least 141 dead, many injured after India bridge collapse 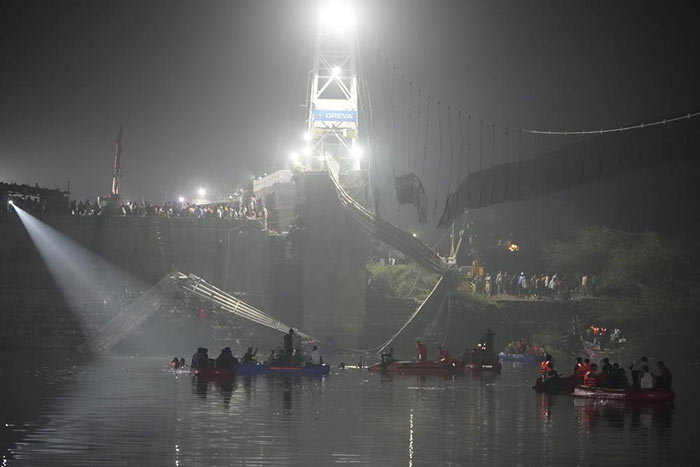 At least 141 people died and many are feared injured after a century-old cable suspension bridge collapsed into a river Sunday evening in the western Indian state of Gujarat, sending hundreds plunging in the water, officials said.

Authorities said the 19th-century, colonial-era bridge over the Machchu river in the state’s Morbi district collapsed because it could not handle the weight of the large crowd, as the Hindu festival season drew hundreds of people to the recently opened tourist attraction. The bridge had been closed for renovation for almost six months and was reopened just four days ago.

It was not immediately clear exactly how many people were on the 232-meter (761-foot) -long bridge, but officials fear the death toll could rise. State minister Brijesh Merja told reporters that 60 people have died so far and that 17 people were admitted to hospitals.

Merja said emergency responders and rescue workers were searching for the survivors and those killed and injured were mostly teens, women and older people. Teams from the Indian Army, Navy and Air Force were also dispatched to help with the rescue.

“A rescue operation is underway,” Merja was quoted as saying by the Press Trust of India news agency. “There are reports that several people have suffered injuries. They are being rushed to hospitals.”

Videos on social media showed people clinging onto the metal cables of the partly submerged bridge in distress as emergency teams and rescuers used boats and inflatable tires to reach them. Some people were seen swimming ashore to safety. Others, who were fished from the waters, were carried away and transported to the hospitals in private vehicles and ambulances.

Local news channels ran pictures of the missing shared by concerned relatives in search of their loved ones.

Prime Minister Narendra Modi, who is in his home state of Gujarat on a three-day visit, said he was “deeply saddened by the tragedy.” His office announced compensation to the families of the dead and urged for speedy rescue efforts.

Meanwhile, the state government said it has formed a special team to investigate the disaster.

A vote for Gujarat’s state government – led by Modi’s party – is expected in the coming months and opposition parties have demanded an investigation into the collapse, saying that the bridge was reopened without getting safety clearance from the city’s civic body. The claim could not be independently verified.

Modi ruled the state as the top elected official for 12 years before becoming India’s prime minister in 2014.

On Saturday, a Halloween crowd surge killed more than 150 mostly young people who attended festivities in Itaewon, a neighborhood in Seoul, South Korea. On Oct. 1, police in Indonesia fired tear gas at a soccer match, causing a crush that killed 132 people as spectators attempted to flee.

Home » At least 141 dead, many injured after India bridge collapse