At least 91 dead after quake strikes Lombok and Bali 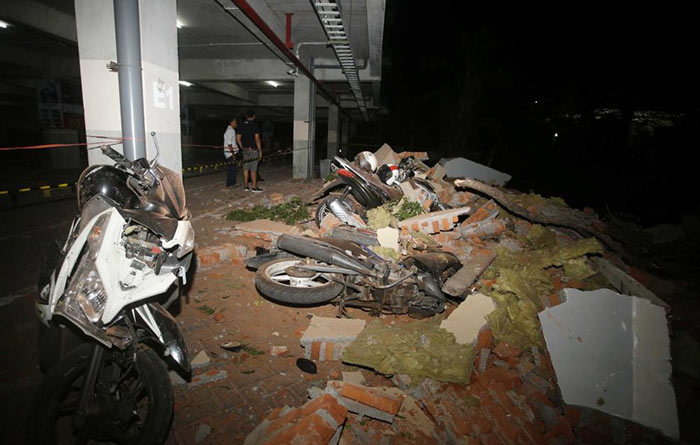 The 6.9-magnitude tremor, which triggered panic among tourists and locals on Sunday evening, was also felt on the neighbouring island of Bali, one of Southeast Asia’s leading tourist destinations.

According to an AFP report, the magnitude of the quake was revised from 7.0 to 6.9 by the US Geological Survey.

Nugroho said an initial tsunami warning which was later cancelled had sparked terror as residents scrambled to reach safer ground.

“People were panicking … especially because of the early tsunami warning,” he said.

Memories of the devastating 2004 tsunami which claimed 168,000 lives in Indonesia remain raw in the vast archipelago nation.

Most of the victims in the latest disaster died in mountainous northern Lombok, away from the main tourist spots on the south and west of the island. Thousands of people were evacuated to outside shelters.

Lombok’s beaches and hiking trails draw holidaymakers from around the world.

The death toll jumped from 37 hours earlier as the scale of the destruction began to emerge overnight.

Rescue officials said much of the damage had hit Lombok’s main city of Mataram.

It was the second quake to hit Lombok, whose beaches and hiking trails draw holidaymakers from around the world, in a week.

Among the dead were a one-year-old and a 72-year-old, an official said, adding that at least hundreds of others were injured.

Residents of the city described a strong jolt that sent people scrambling to get out of buildings.

“Everyone immediately ran out of their homes, everyone is panicking,” Iman, who like many Indonesians has one name, told AFP.

Electricity was knocked out in several parts of the city and patients were evacuated from the main hospital, witnesses and officials said.

Pictures showed patients lying on their beds outside the clinic while doctors in blue scrubs attended to them.

Sutopo Purwo Nugroho, spokesman for Indonesia’s disaster mitigation agency, said most of the damaged buildings in the city were built with substandard construction materials.

Singapore’s Home Affairs Minister K. Shanmugam, who was in Lombok for a security conference when the earthquake struck, described on Facebook how his hotel room on the 10th floor shook violently.

“Walls cracked, it was quite impossible to stand up,” he said.

The quake caused light damage as far away as the Javanese city of Bandung, about 955km from Mataram, but was felt strongly on the neighbouring resort island of Bali.

People could be heard screaming as locals and tourists ran onto the road.

“The first one lasted quite a while, the second one was only about 2-5 seconds. The first one was the bigger one,” he told AFP.

Bali’s international airport suffered damage to its terminal but the runway was unaffected and operations had returned to normal, disaster agency officials said.

Facilities at Lombok’s main airport were also unaffected, although passengers were briefly evacuated from the main terminal.

Some of those affected by the earthquake took to Twitter to describe the ordeal, with one user claiming it was the “strongest quake” they had felt in years.

“Everyone immediately ran out of their homes, everyone is panicking,” Iman, a local resident in Mataram, told AFP.

Holidaymakers in Bali reportedly felt the effects of the quake, including supermodel Chrissy Teigen who is there on holiday with her husband John Legend.

Indonesian authorities also warned of aftershocks of about a 5.6 magnitude, while the United States Geological Survey picked up several aftershocks ranging from a magnitude of 4.4 to 6.9.

People were seen running out of houses, hotels and restaurants in Bali.

“All the hotel guests were running so I did too. People filled the streets,” said Michelle Lindsay, an Australian tourist.

“A lot of officials were urging people not to panic.”

Other witnesses said the quake got stronger over several seconds and rattled windows and doors.

The tremor came a week after a shallow 6.4-magnitude quake hit Lombok, killing 17 people and damaging hundreds of buildings.

Indonesia, one of the most disaster-prone nations on earth, straddles the so-called Pacific “Ring of Fire”, where tectonic plates collide and many of the world’s volcanic eruptions and earthquakes occur.

In 2004 a tsunami triggered by a magnitude 9.3 undersea earthquake off the coast of Sumatra in western Indonesia killed 220,000 people in countries around the Indian Ocean, including 168,000 in Indonesia.

Home » At least 91 dead after quake strikes Lombok and Bali