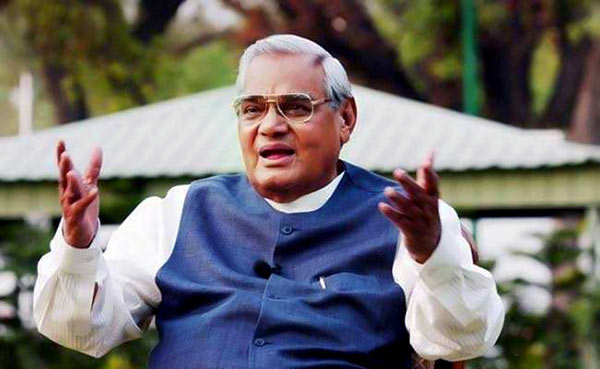 He was being treated for age-related illnesses in Delhi’s AIIMS hospital.

Vajpayee was one of the founding members of the Hindu nationalist Bharatiya Janata Party (BJP), which currently governs India.

Considered a giant of Indian politics, he served as prime minister three times between 1996 and 2004 and was instrumental in making India a global nuclear power.

During his second stint as prime minister in 1998, he surprised the world by announcing that India had conducted a series of underground nuclear tests.

It was the first time India had carried out nuclear tests since 1974.

The experiments had taken place without any warning to the international community, which led to widespread outrage and concern.

But in India he was hailed as a hero, and it helped him bolster his image as a leader who was serious about national security and not afraid of international pressure.

The BBC’s Vineet Khare who was at the AIIMS hospital when the news of Vajpayee’s death was announced, says supporters carrying the former prime minster’s pictures began gathering at the hospital and shouting slogans. “He was a charismatic politicians who took pride in India and took everyone along. He will be missed,” one of them said.

He boarded a bus to travel to the Pakistani city of Lahore in 1999 for a remarkable summit with Nawaz Sharif, who was then Pakistan’s prime minister.

The two men, both under immense pressure and politically weak, agreed to a number of confidence-building measures.

But tensions with Pakistan intensified once again after the seizure of power by the Pakistani army under Gen Pervez Musharraf.

And in December 1999, an Indian airliner was hijacked by Pakistani militants en route from Kathmandu, the Nepalese capital, and Delhi and was flown to Afghanistan.

There was anger that the Pakistani authorities had allowed the aircraft to land and refuel in Lahore.

Mr Vajpayee was considered one of India’s best orators, enabling him to connect with millions of Indians across class and caste divides.

He was also a successful poet in the Hindi language and published a number of books.