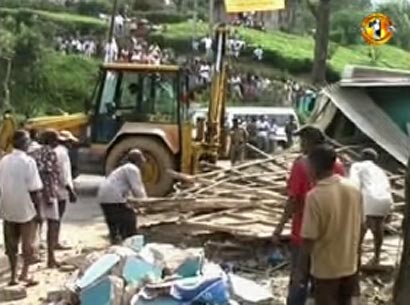 October 15, 2010: The Opposition leader of the Ambagamuwa Pradeshiya Sabha and four others have been remanded for allegedly attacking officials of the Road Development Authority (RDA) who had been removing an unauthorised structure at the Norwood junction on the Hatton – Maskeliya main road yesterday.

Three officials of the RDA, including the backhoe driver, had been injured in the incident.

The attack had taken place when the RDA men were removing an unauthorised shop at the Norwood junction with the use of a backhoe under police protection.

The five persons had pelted stones and bottles at the RDA men and three officers, who had sustained injuries, have been admitted to Dickoya District Hospital.

Policemen from Hatton had arrived at the location to control the situation.

According to the Newsfirst correspondent, the unauthorised structure had been removed.

The suspects were produced before the Hatton magistrate yesterday and remanded till October 18.