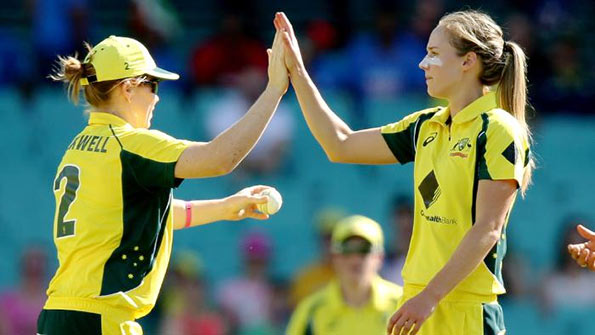 Australia’s women’s cricketers have completed an emphatic 4-0 clean sweep of their one-day series against Sri Lanka with a crushing 137-run win in Colombo.

The Southern Stars made 3-268 at Khettarama Stadium on Sunday, thanks mainly to opener Nicole Bolton’s 113, before bowling Sri Lanka out for just 131.

The wickets were shared around, with Kristen Beams taking 4-26 from her 10 overs to make it 13 wickets at an incredible average of 5.92 for the series.

Ferling (3-30) and Rene Farrell (3-17) ensured the hosts got nowhere near their victory target.

Bolton was out in the final over of the innings when caught in the deep off Ama Kanchana’s bowling, and the right-hander shared in a 140-run third-wicket partnership with Ellyse Perry (77 not out) that set up the formidable total.

Skipper Meg Lanning, who won the toss for the third straight match, chipped in with 43.

The two teams battle in a Twenty20 fixture on Tuesday in Australia’s final match of the tour.