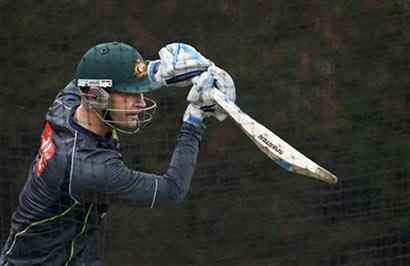 Australia captain Michael Clarke is one of three big names to return to the squad for the third and fourth one-day internationals against Sri Lanka after a disappointing showing by stand-ins on Sunday.

Opening batsman David Warner and wicketkeeper Matthew Wade were the others to be recalled for the matches in Brisbane on Friday and Sydney on Sunday, with all-rounder Moises Henriques also given a chance to impress.

The 25-year-old Portuguese-born Henriques scored 18 runs and took one wicket in his two previous ODIs for Australia against India in 2009.

“Moises is a young man who has shown promise for some years with both the bat and the ball,” Cricket Australia National Selector John Inverarity said in a statement.

“This will be an opportunity for him to impress as we look for a good seam bowling all-rounder.”

Aaron Finch and Steve Smith, who struggled in the eight wicket loss to the tourists on Sunday that levelled the series at 1-1, were dropped from the 12-man squad with Usman Khawaja, Kane Richardson and Ben Cutting also making way.

Wicketkeeper Brad Haddin was also left out after suffering a hamstring injury in the Adelaide loss but Mitchell Starc and Mitchell Johnson have been named despite injury concerns.

Australia’s rotation policy has been criticised by a number of former players but Inverarity defended the system.

“The other key factor that’s not often mentioned is the lack of proper conditioning periods. It’s very difficult to find an extended timeslot when they can undergo appropriate conditioning.”

Changes will also take place in the coaching set up for Friday’s clash at the Gabba with Steve Rixon taking over the head coach role with Mickey Arthur returning home to South Africa to spend time with family before the Sydney match.

The fifth and final ODI will be played in Hobart on January 23 before Sri Lanka wrap up their tour with two Twenty20 matches.